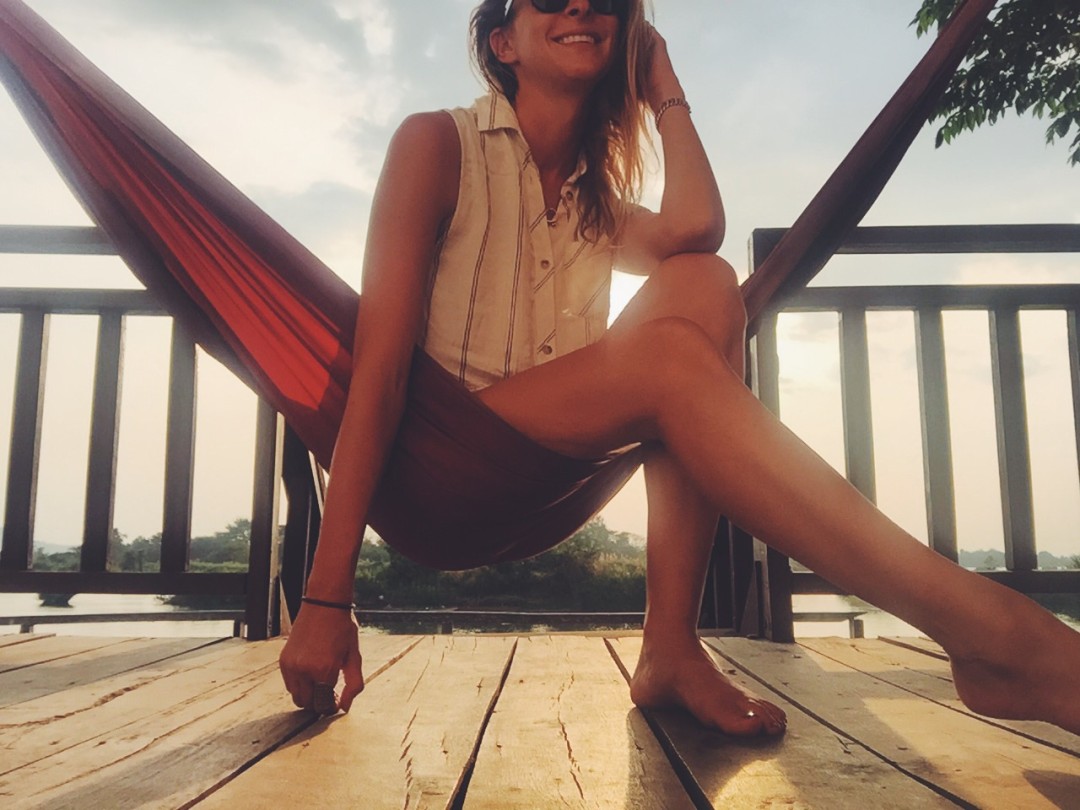 Although I was in Don Det for nearly a week, this is going to be a very short post because I did NOTHING. And it was EVERYTHING. Don Det has to be one of the sleepiest places I’ve been on my travels. I’d heard it was the party island of Si Phan Don (The 4,000 Islands) and was keen to meet some other travelers so I picked it over some of the other, calmer ones. But upon arriving I was very grateful for my decision. If it were any more chill it would be comatose so I can’t imagine what the other islands are like. Perhaps all the bungalows are equipped with dark, warm baths for sensory deprivation. 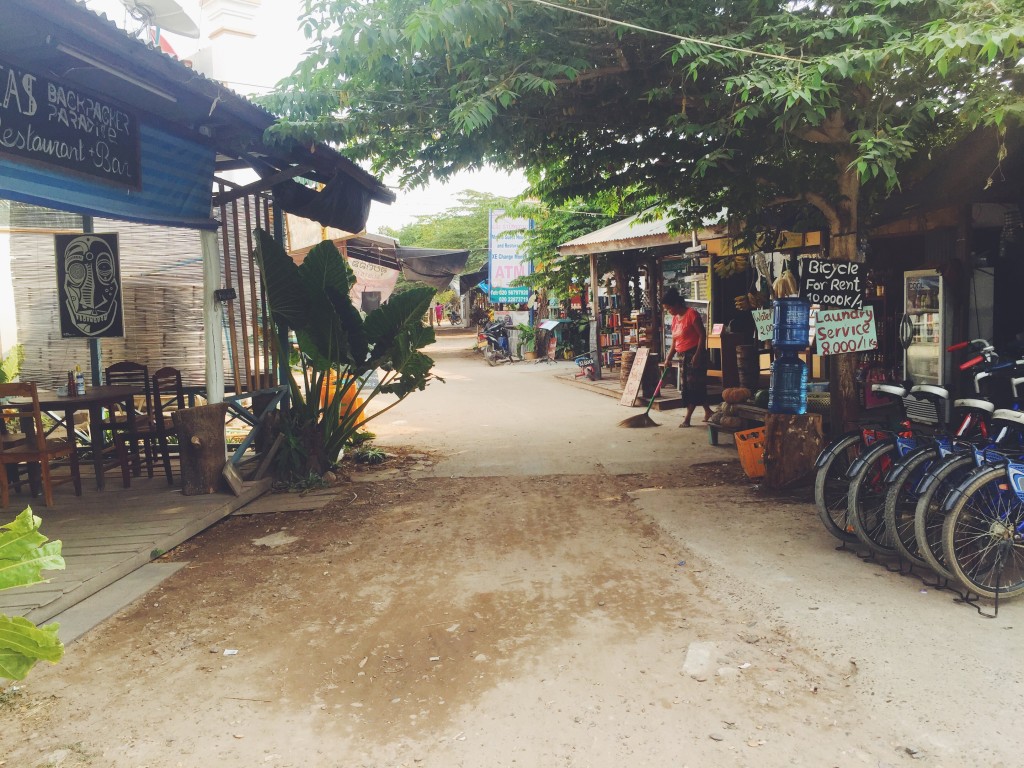 Mornings consist of lazily stumbling out of your bungalow to the hammock on your porch that overlooks the Mekong River. Here you read or listen to music until your stomach starts to make noise, reminding you it’s time for breakfast. During the day you bake on the small sand beach where the long boats  dock, ferrying travelers to and from the mainland. Perhaps you grab a tube for 10,000 kip and drift along with the current and a beer in hand, tethered to your friends by your feet. If you’re really ambitious you can rent a bike and ride around the island or over the bridge to one of the other islands to see the waterfall or the dolphins (Yep. There are dolphins in this part of the Mekong River. Don’t ask me why or how they got there). 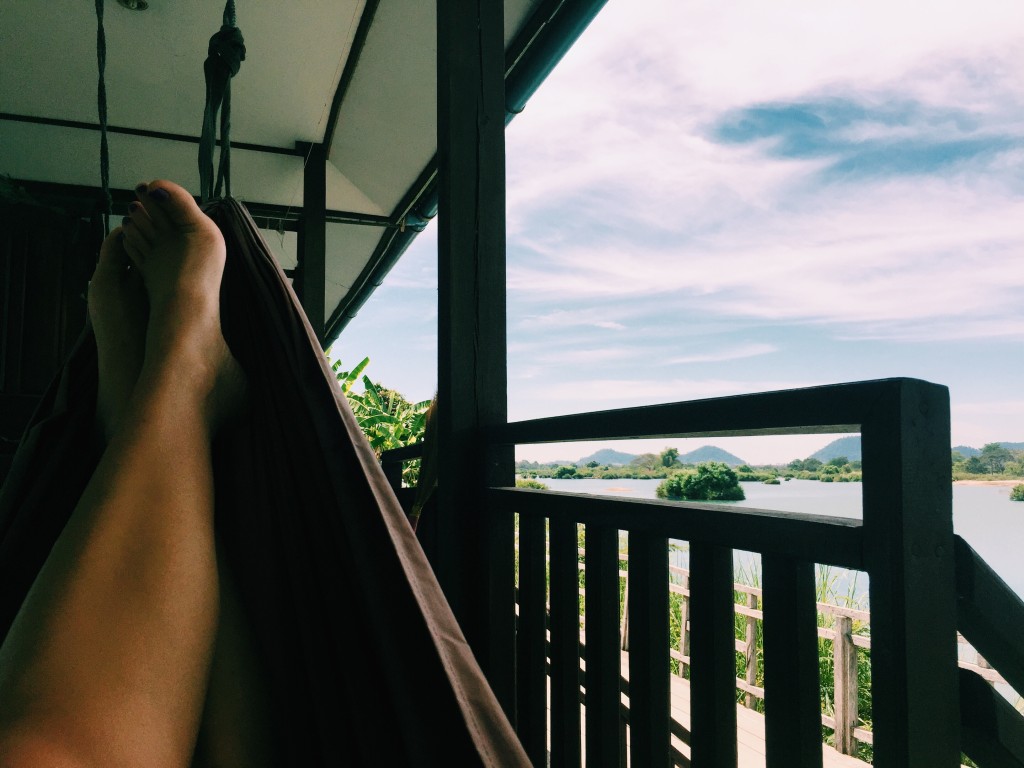 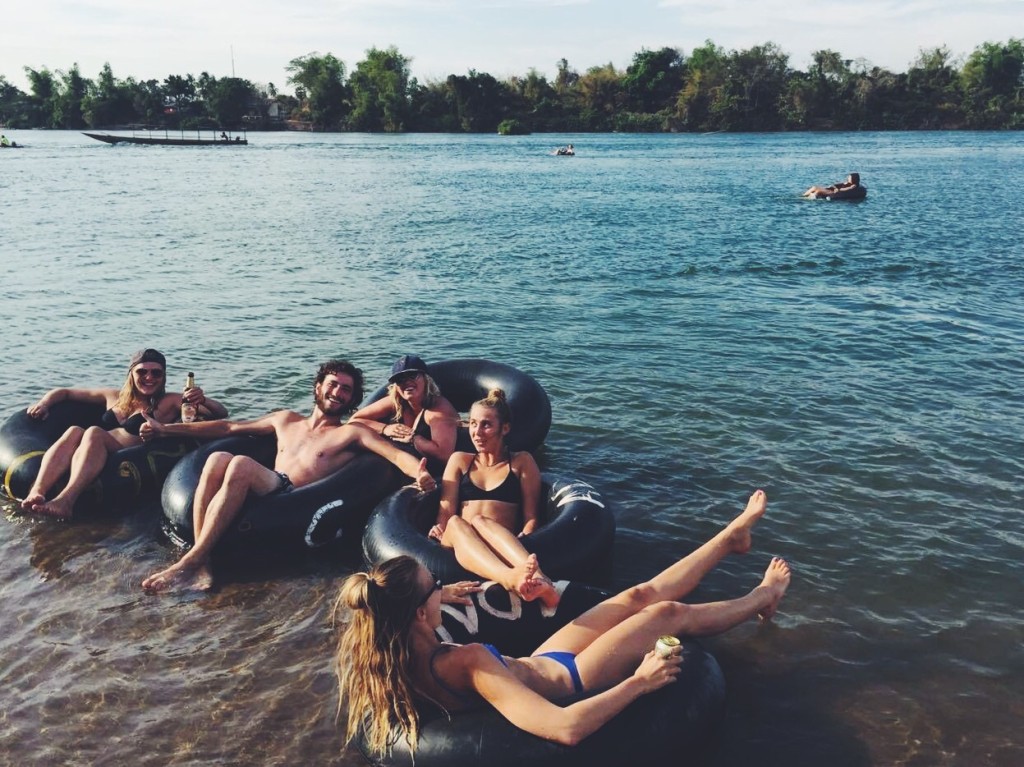 And this is how it’s done folks 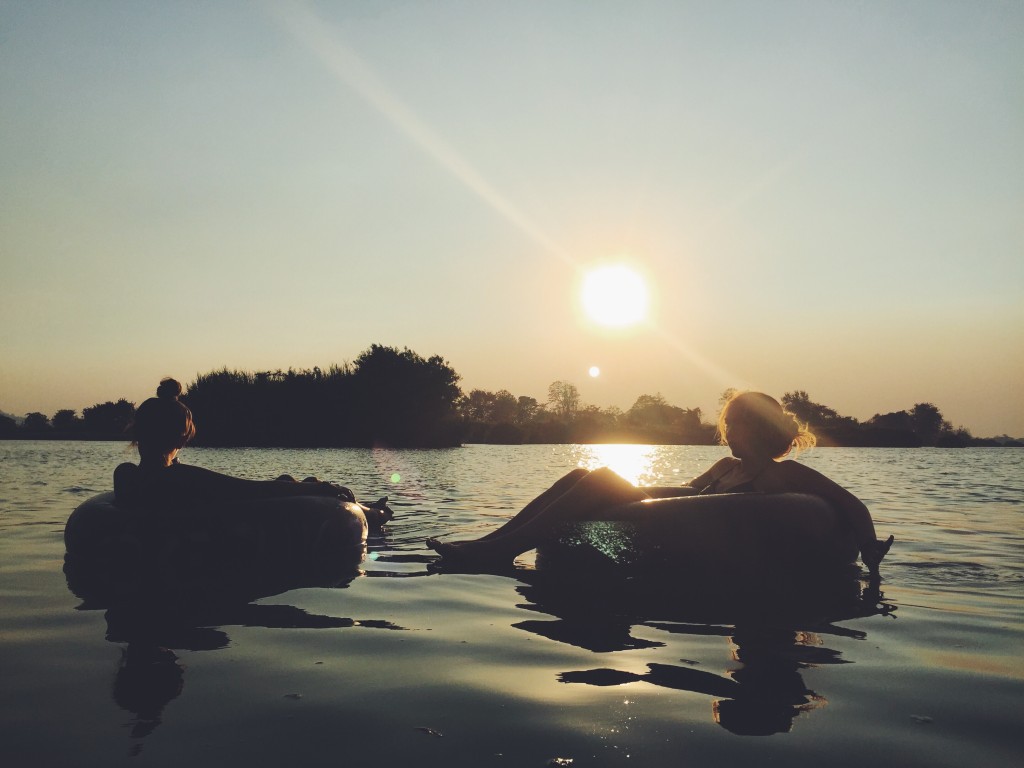 At night you watch the sunset from your hammock, a bar on the west side of the island, or swim to the tiny sandbar known as Monkey Island (just beware of the “monkeys” – local kids who love nothing more than to get in a mud fight with tourists). After sunset you head to one of the various backpacker/Reggae bars for curry, lap (a traditional Laos dish) and some drinks while you play Jenga. One bar shows an endless string of Friends episodes while another has just about every movie/TV show you could want (and freely advertises papers and grinders should you need them for your weed while enjoying mindless American comedies). 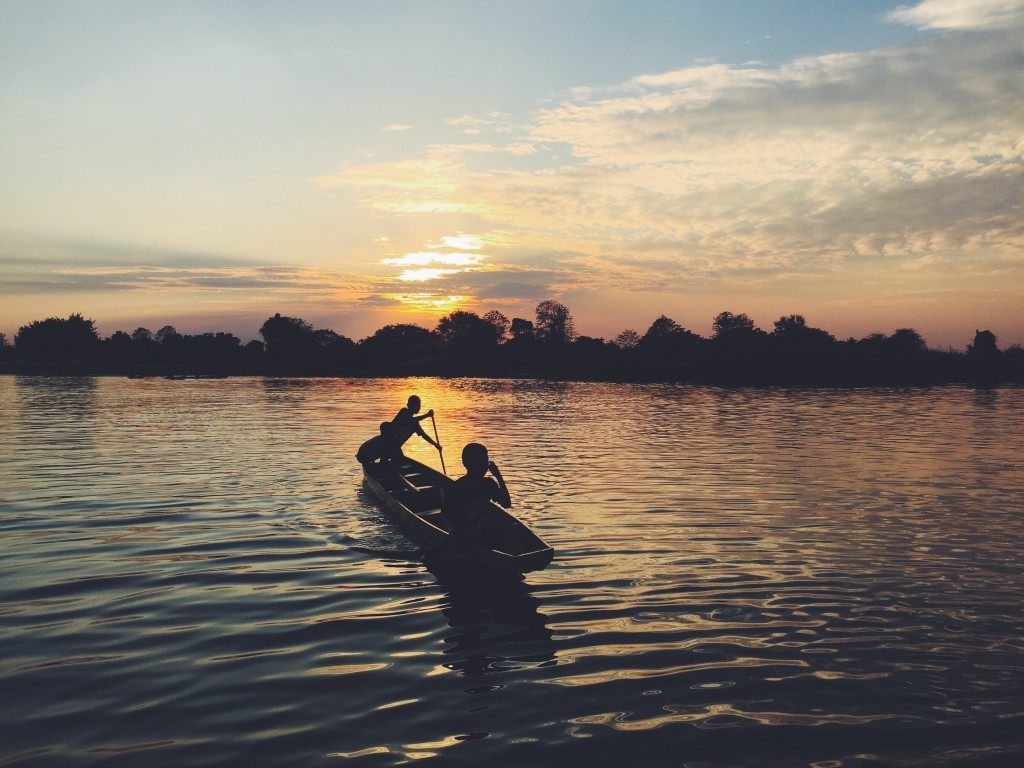 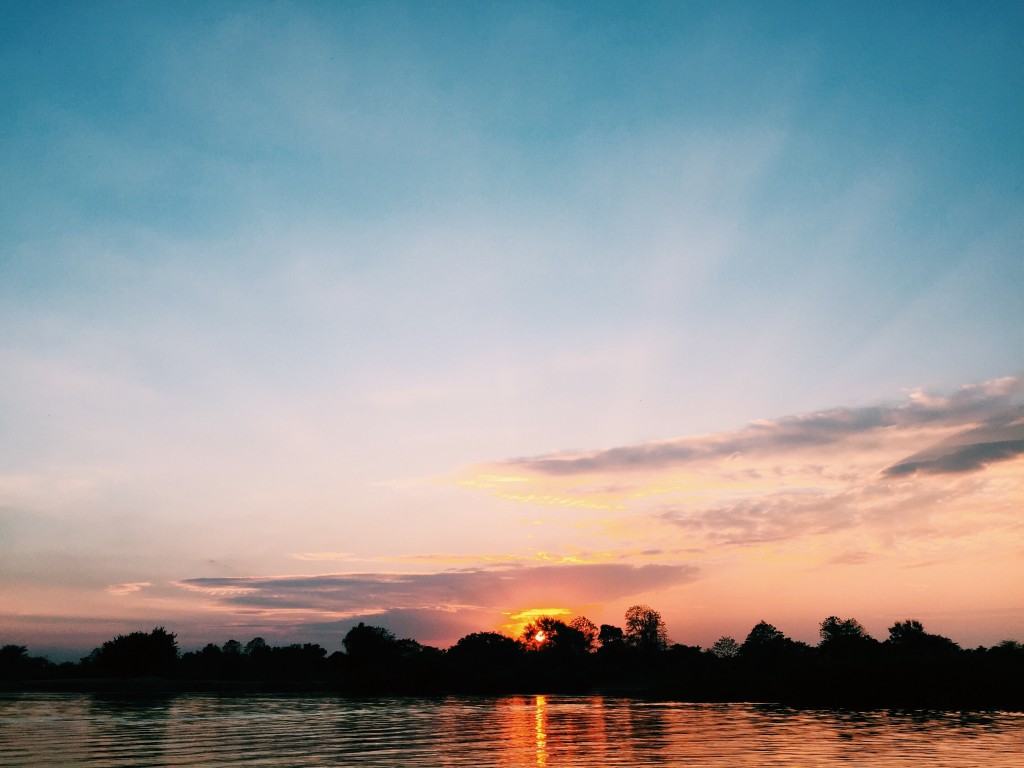 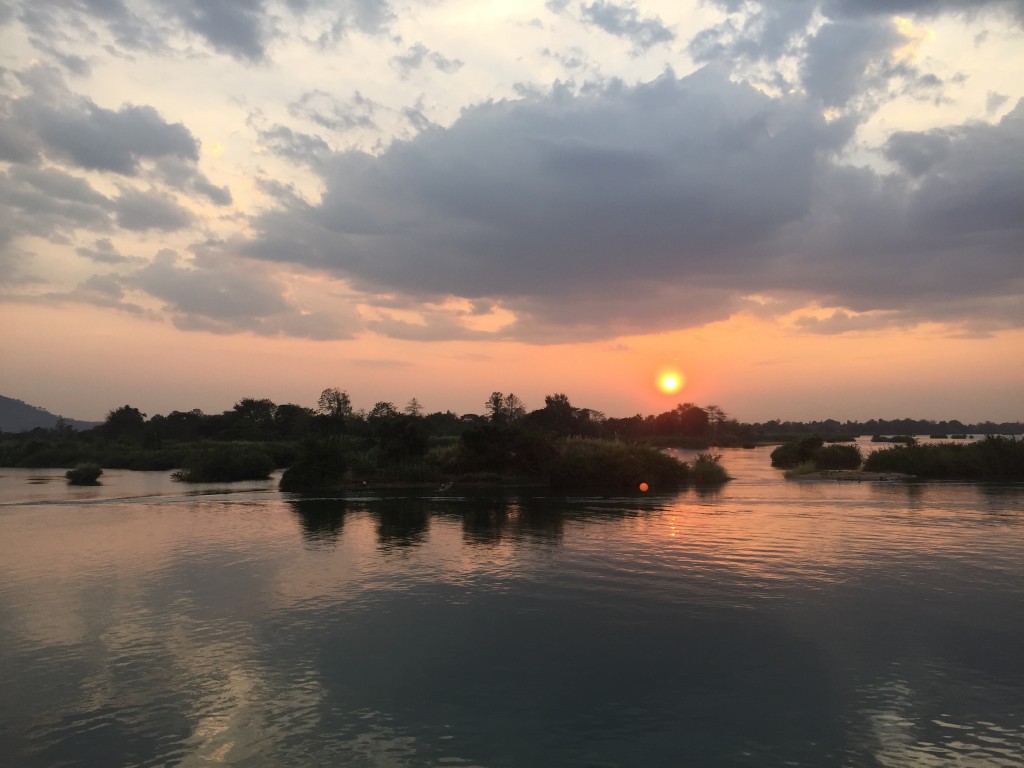 And that’s it. That’s what you do. The vibes are chill, the water refreshing and the views stunning. It’s the sort of place where you consistently hear the question “can I extend a few more nights?” Some travelers lost to space and time have extended for years and now consider themselves Laos. It’s Never Never Land for backpackers and the island has all the characters to prove it. Surprisingly I’m told it was even sleepier in years past, but when the majority of the bars were closed down along the river in Vang Vieng (because too many travelers were getting blind drunk and drowning), backpackers picked up their tubes and headed south to Don Det. The party never ends it just changes venues.

The more you travel (especially as a solo, I think) the easier it becomes to identify people you want to spend time with. I met Kaitlin and Erin (two BFFs from Philly who currently live in San Fran) my first night on Don Det at the Reggae bar and immediately knew I wanted to hang with them. The trick was subtly letting them know this without outright asking, “Excuse me, but could I be your friend for a few days?” Luckily our love was mutual. You know you’ve found good people when you can sit together quietly for hours just as easily as you can chat each others ears off because you have so much to say and so much in common. Such was the case with these lovelies and they definitely made my time on the island. 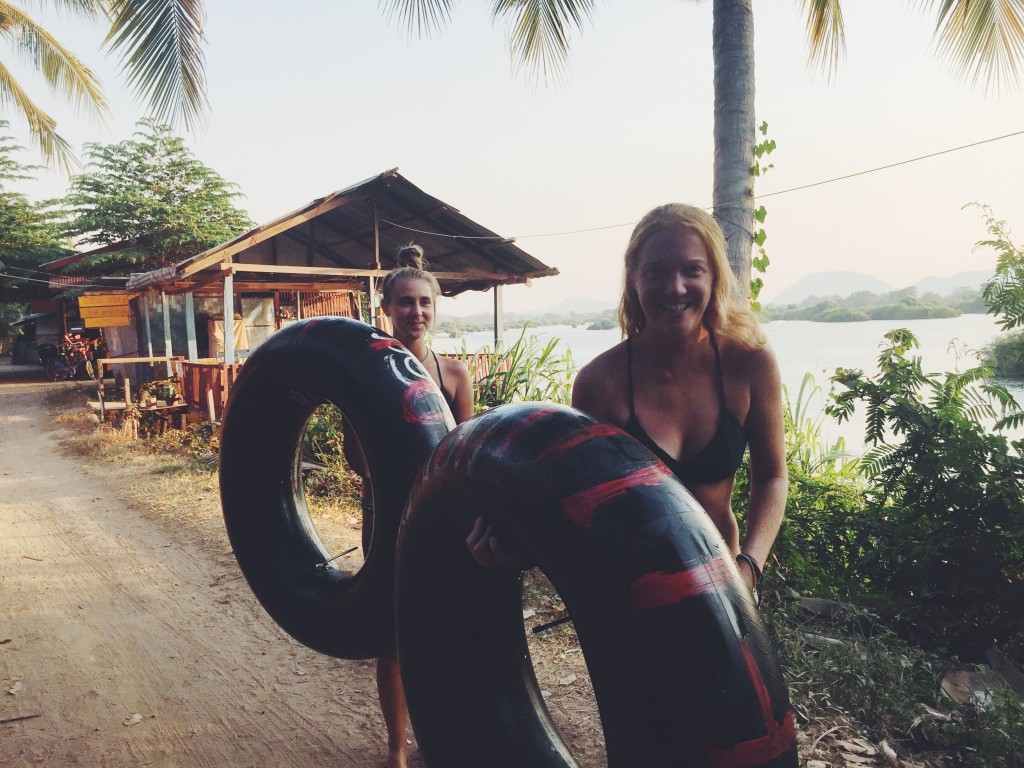 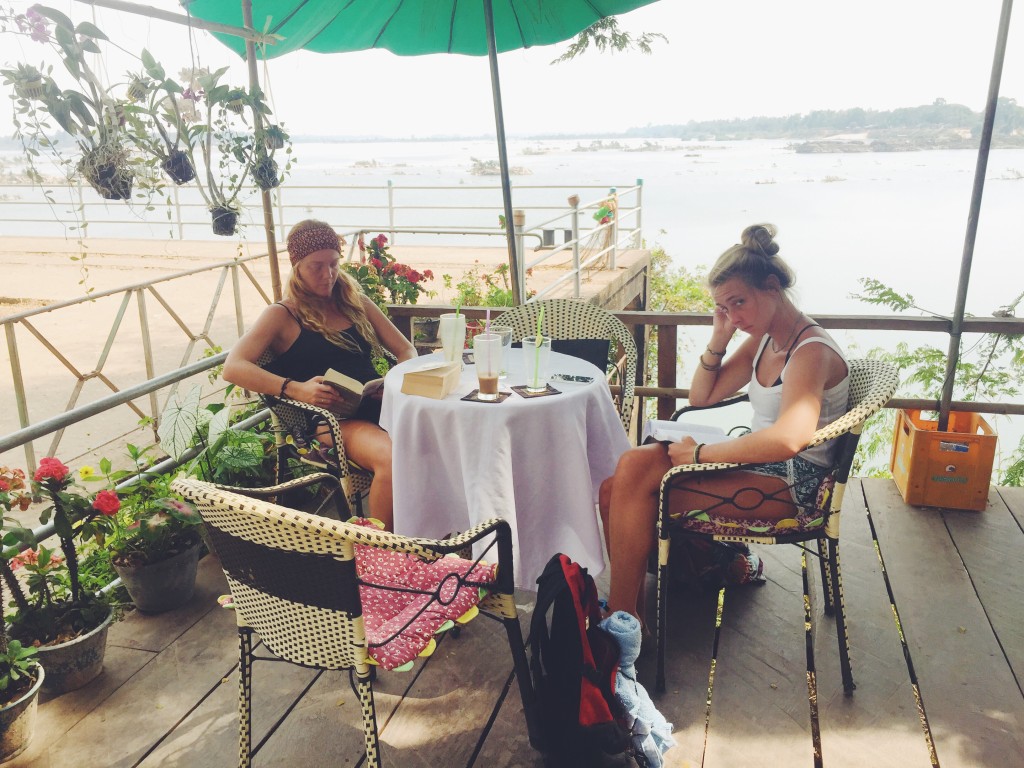 KG with the side eye FTW

One very memorable night came when the three of us were heading to the bar outside my bungalow for sunset drinks. But on the way we were stopped by some expats/turned locals and our Isreali shadow known as River (or, as we liked to say, RIVAAA!). They insisted we join them on their very teeny porch for beers – and who could refuse that? We spent the next three hours cheersing our drinks over anything and everything (“Lift and smash!” was our battle cry) and listening to Bob Marley and old 70s rock. It was an unlikely crew of people who would probably never spend time together in the “real world,” but in the world of travelers we were just some new friends having bevs. And I love that about traveling – meeting and spending time with people I would normally never encounter. As one of the guys would say in agreement “fuck yeah or fuck off!” I wouldn’t have put it quite like that, but yeah… exactly! 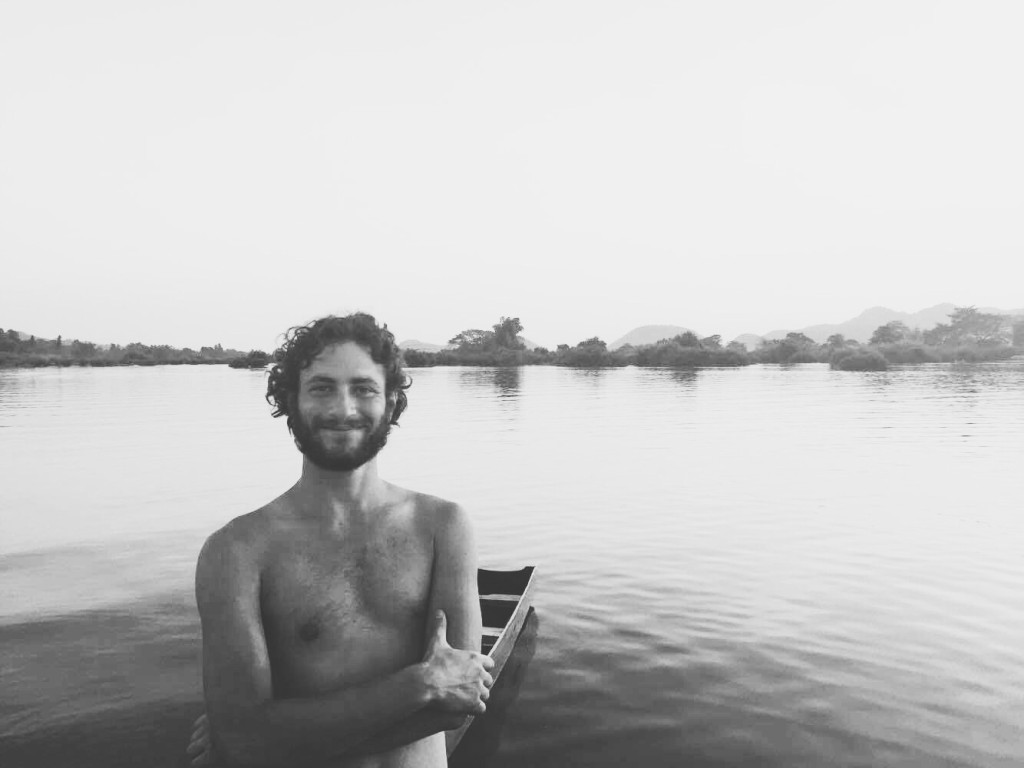 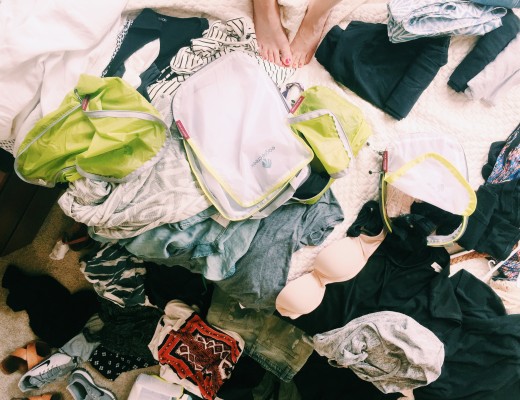 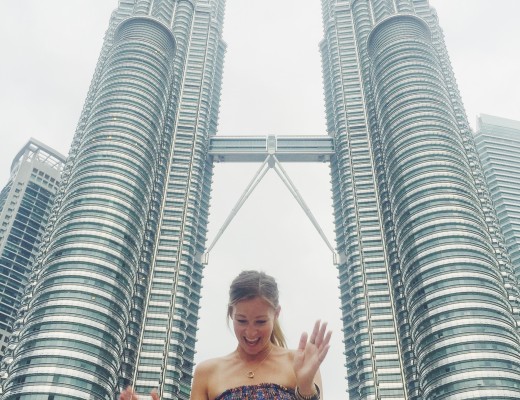 It’s All About Timing 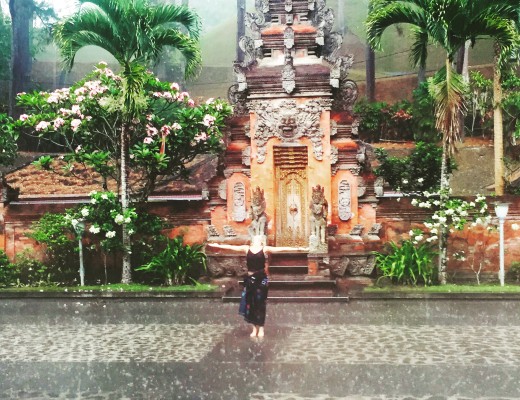