After two wonderful, whirlwind weeks with my family, Marge At Large is solo again and ready to depart for Bali tomorrow! I wish I would have kept up with my writing while my family was here because now I feel bit overwhelmed with how much there is to recall. We did A LOT in two weeks. We started in Seville, but spent most of our time bouncing around the smaller towns that make up Andalusia (Cadiz, Jerez, Arcos, Grazalema, Zahara, Ronda, Granada) and then finally up to Madrid.

My mom had actually been planning this trip to Spain long before I decided to take my life sabbatical. The trip was a celebration for her 60th birthday. She’d been talking about seeing the Alhambra for years, so her decision to go to Spain actually influenced my entire itinerary (starting in Portugal, meeting up with them in Spain and then onward to Southeast Asia) and I’m grateful because it worked out so well.

On her actual birthday (Oct. 22) we were in Jerez. In the morning we walked around, toured the market (which was INSANE) and ate some churros fresh outta the fryer before heading off to the main event: a sherry tasting tour. The tour was definitely enjoyable, but as my dad said, “I’m glad I tried all that sherry so I can say for certain that I don’t like it.” The experience was great, but sherry wasn’t our cup off tea. The dry sherry tasted more like a boozy, salty liquor than a wine, and the sweet sherry tasted a bit like syrupy, thick cough medicine. This is just one humble foodie’s opinion. But dry sherry is said to open up your stomach preparing you for your meal (aka allowing you to eat more) which I really appreciated.

We had a guide who met us at our hotel and led us through the old town of the city, which, after wading through the suburb-like surrounding area, was lovely. We made the mistake of having this impression with nearly every town and city we visited. Upon arriving the five of us would go mute, silently grimacing at the modern billboards, stores and American fast-food restaurants. But eventually we would wander into the stone-street city center, lined with outdoor tables with umbrellas, cute shops, hams hanging forms windows and would all agree how perfect it was. Classic case of judging a book by its cover. 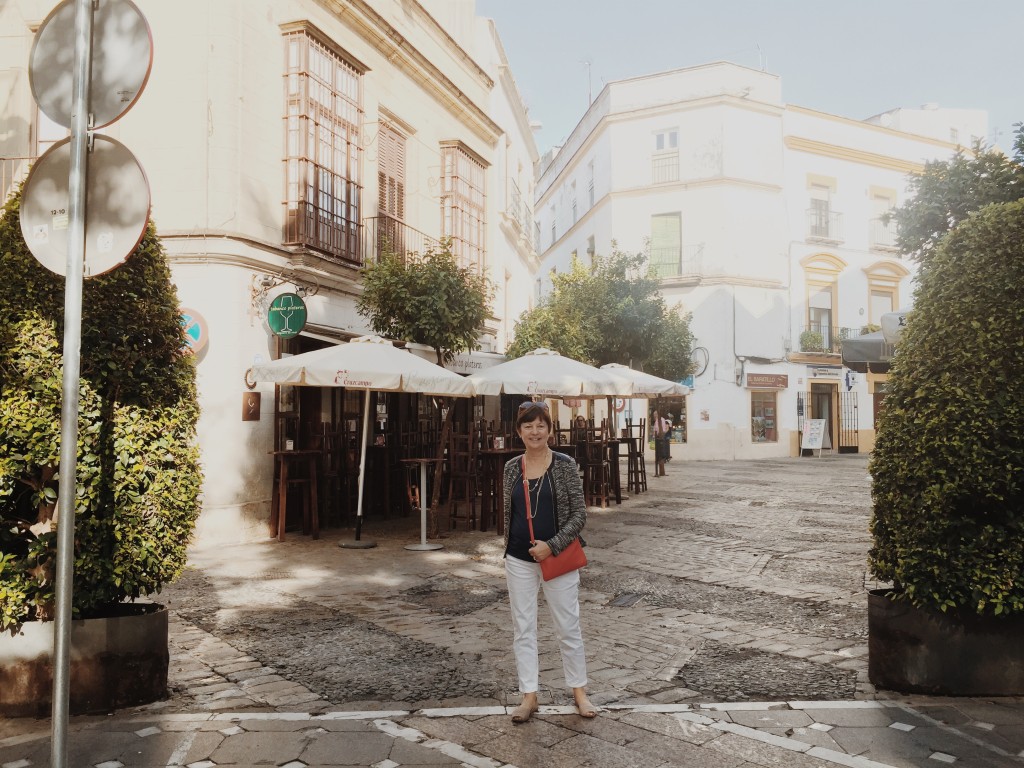 Mom on the streets of Jerez 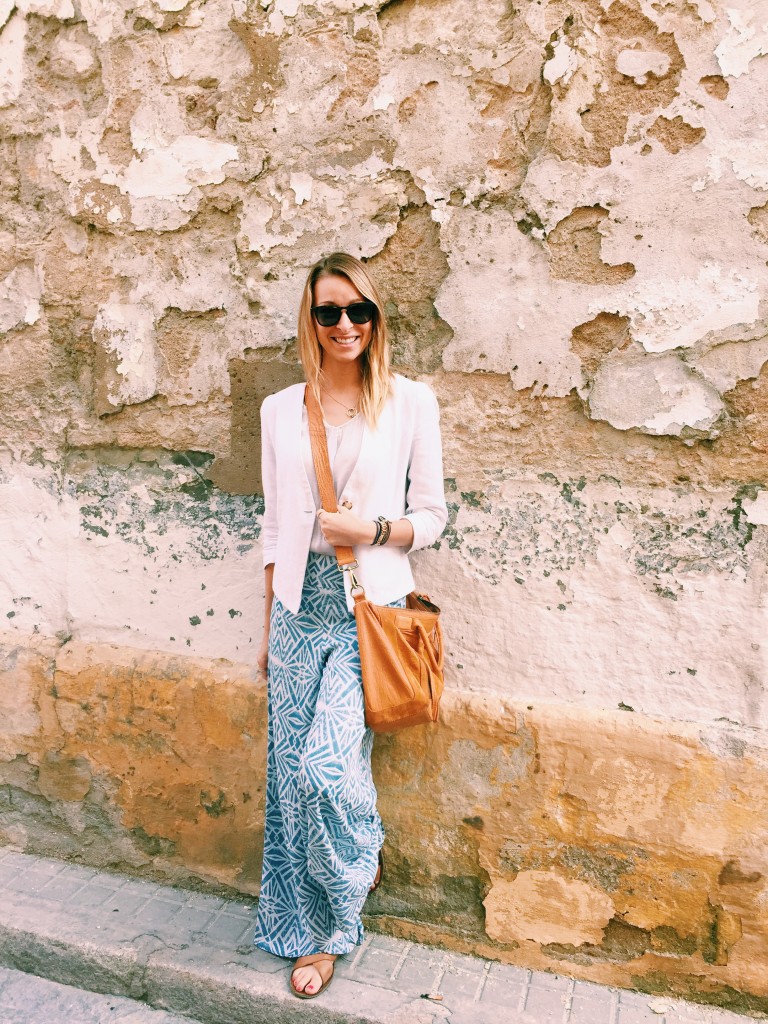 At the bodega where we tasted four different sherries we learned about the process (the grapes are dried liked raisins, which intensifies the flavors and sweetness) and were able to see the owners’ private art collection. The collection included Goyas, Velazquez, and my favorite, El Greco. I normally reserve full-body shivers for food and guys, but I have to admit that standing in front of these works in a private collection really got to me. It was just a taste of what was to come at The Prado in Madrid, which houses some of the most incredible masterpieces. Don’t miss The Prado, but skip the Reina Sofia (the contemporary art museum) – it’s ok at best. 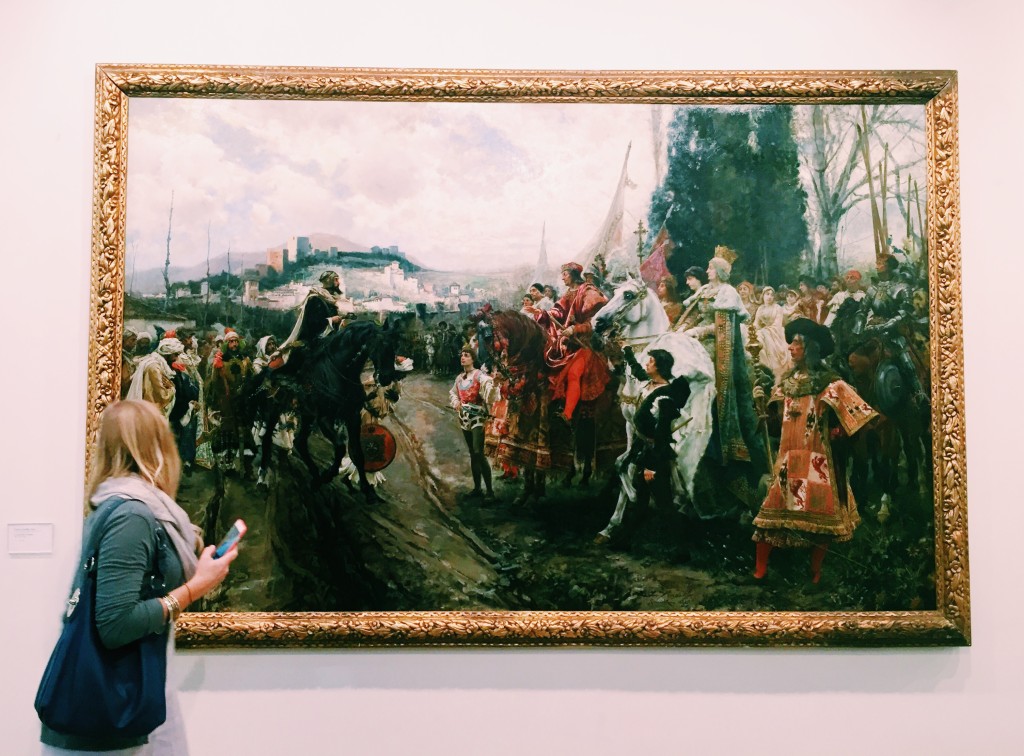 My SIL, Ashlee, at the private collection of the bodega 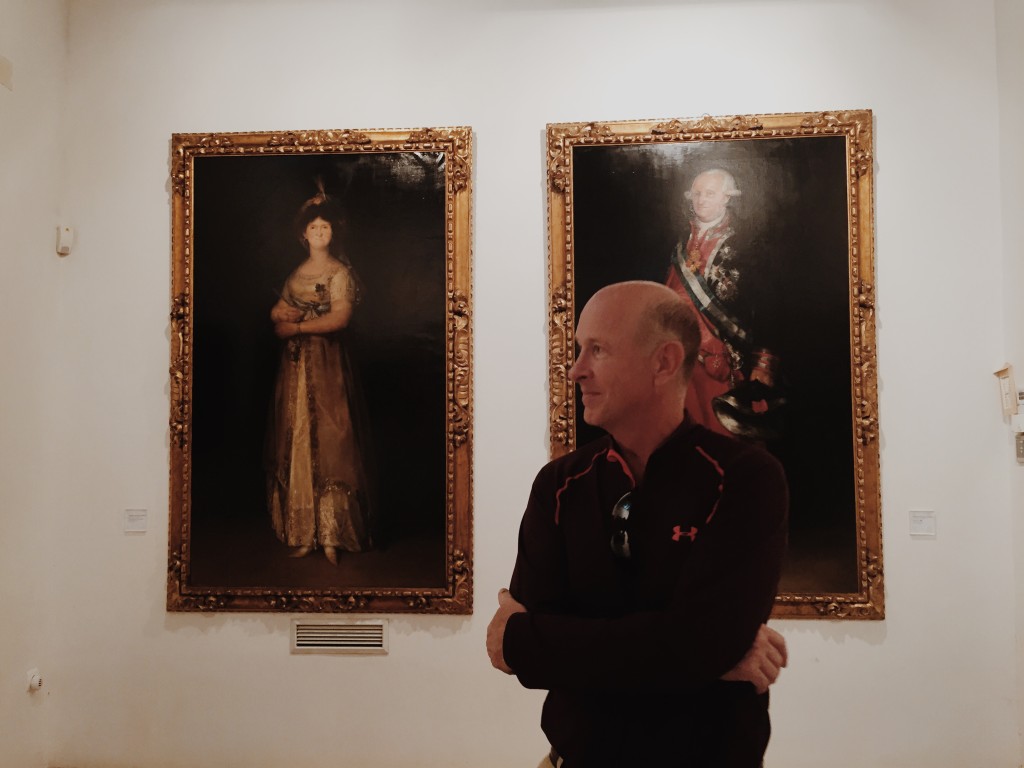 Dad in front of the Goyas

After the sherry tasting at the bodega it was time to put our new knowledge to use… by drinking more sherry of course! Lucky for us there was plenty of good food involved. The best, and one of my favorite memories of the past two weeks, was when we visited a man-cave type bar called Tabanco el Pasaje. It was cute, but definitely a townie bar (which is always the best, right?!). Locals stood around sipping sherry, eating tapas and enjoying the chorus of old men who were having an impromptu Flamenco concert. One man sang, one played the guitar and 2-3 others clapped around in different (and impossible) rhythms. We grinned and nodded along (we didn’t dare clap as the beat was changing all the time with no warning). Like all charming men, this just encouraged them more. Eventually the whole bar was swaying, singing along and tossing back sherry as if it was the nectar of the Gods and not an alcoholic saline solution. 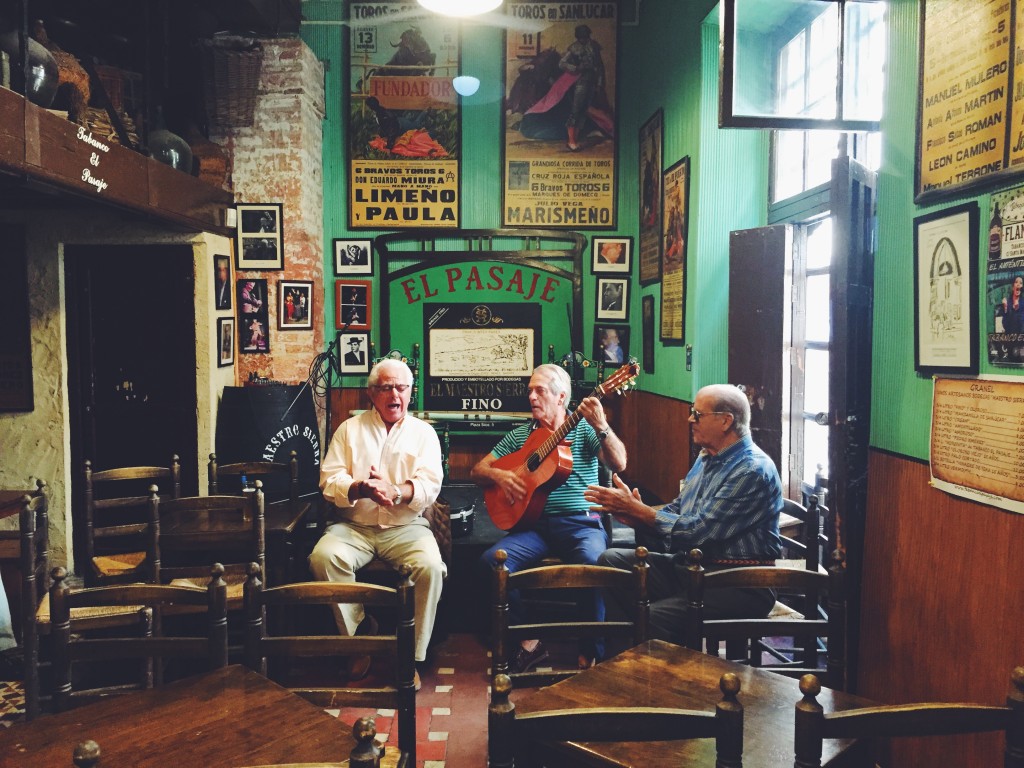 That night we dined on fresh seafood, talked about the last 10 years, the next 10, and toasted our beautiful matriarch. It was an unforgettable day. 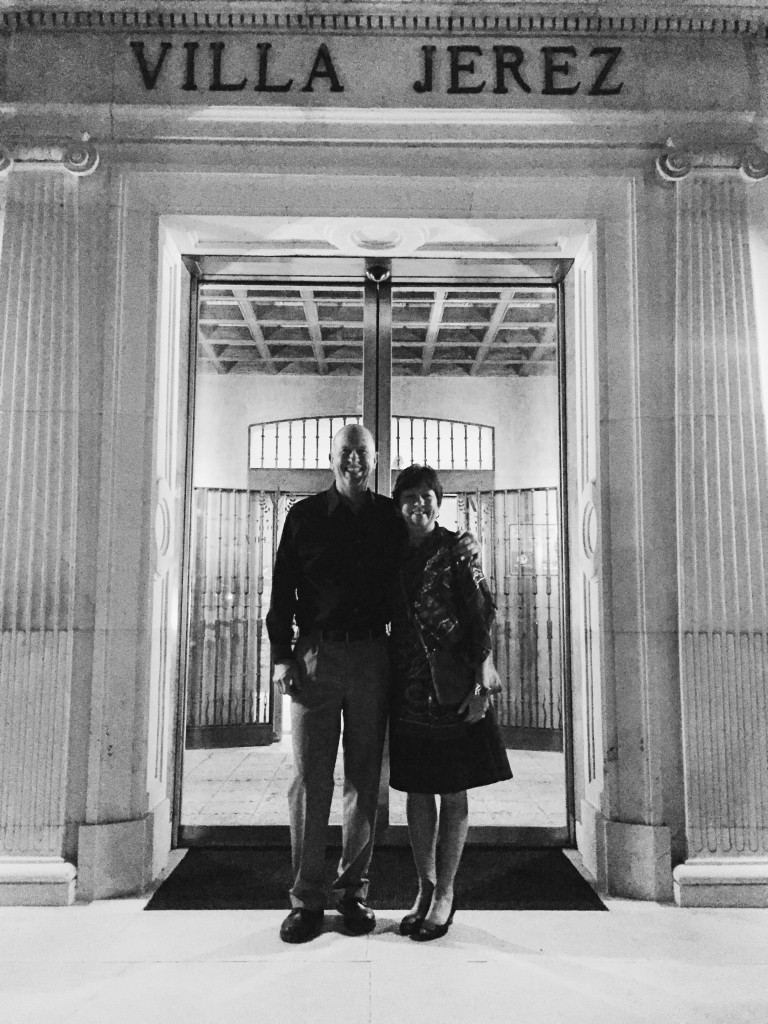 Ready for Mom’s birthday dinner out 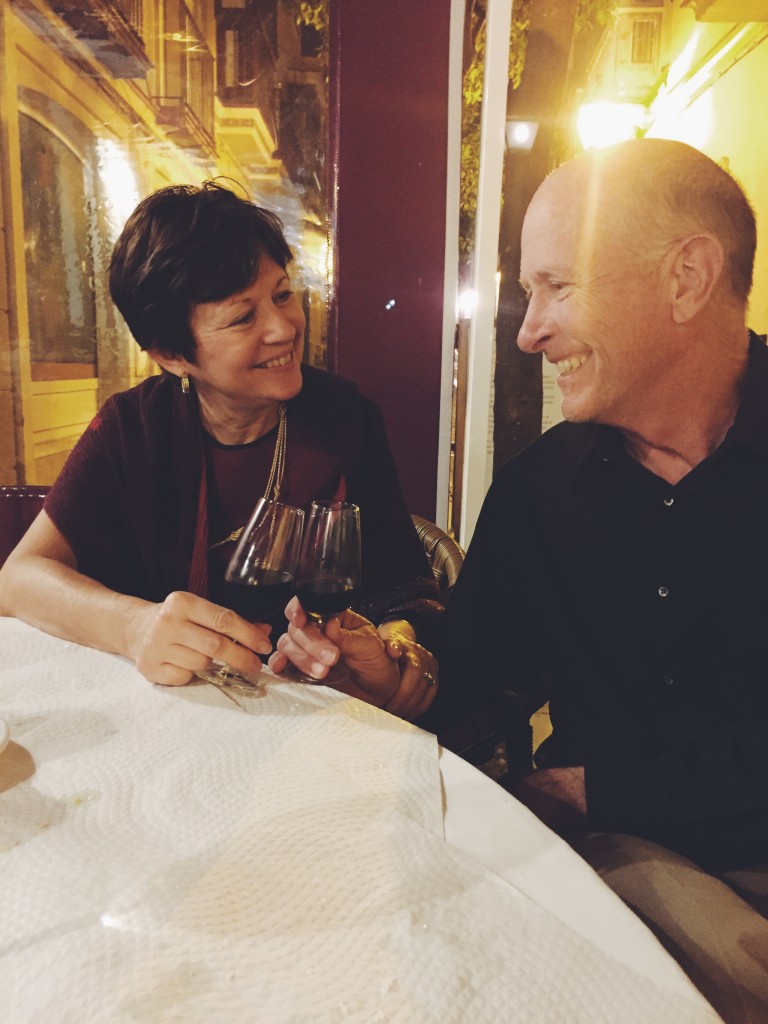 Lovebirds talking over the future