In Inle Lake we had reached the promised land. Sure, the power went out all over town for hours at a time, taking with it the hot water and wifi. But we were in civilization again and I could finally tend to my feet. The night we arrived Mel, Max, Tom, Thomas and I shared a victory meal – and lots of victory drinks – recapping the past few days (which I could finally laugh about now that I wasn’t in agonizing pain). Liquid courage and pure desperation caused me to flirt shamelessly with Max, but my game was off and he was not catching my drift. Perhaps some things were lost in translation. My wit can be difficult to grasp even for native English speakers… or at least that’s what I’m telling myself. In all realness I got stonewalled and I’m bitter about it.

Our trekking crew was moving on but luckily Mel and I had our English pals, Alex and Bea to meet up with. The four of us spent our days tooling around the lake, eating great food and just generally goofing off. One our second full day in Inle, we were carted around on a long boat we’d chartered to various sites around the lake and its surrounding villages. Fishermen balancing impressively on one foot while rowing with the other, delicate lotus flower weaving, exotic long-neck ladies, craftsmen like cigar rollers, boat makers, blacksmiths and silversmiths, and a monastery that used to be famous for its jumping cats, but whose lazyass cats do nothing but cry for food now. You know… the usual stuff. 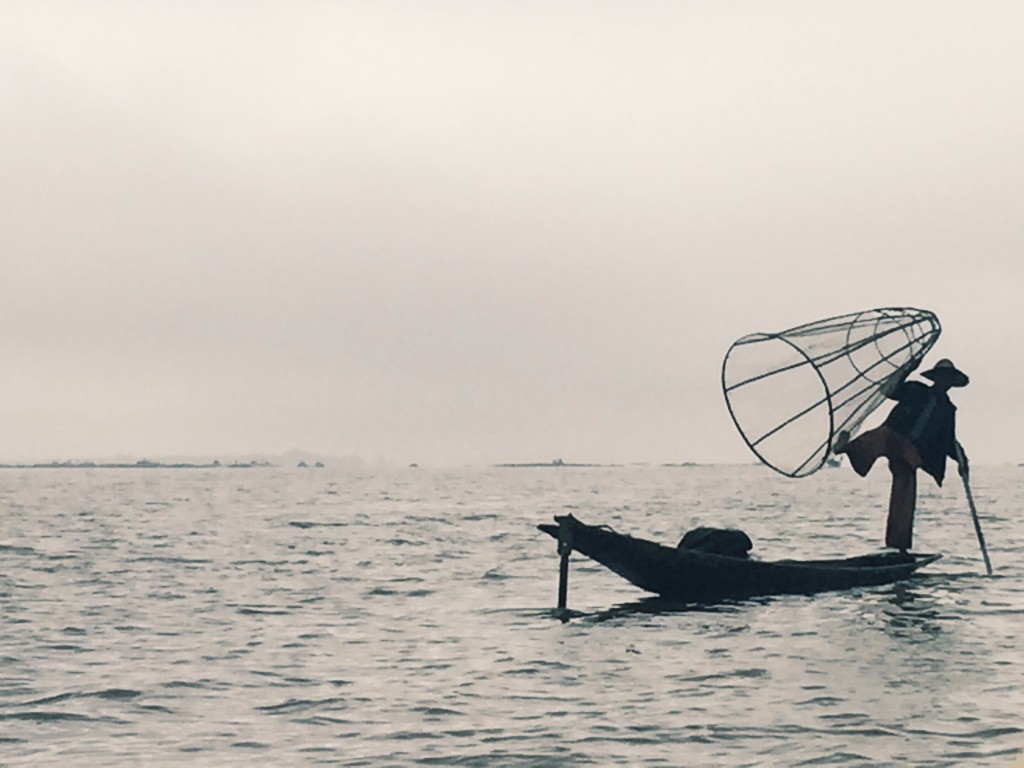 Balancing act… one minute later he asked me for “paper money” 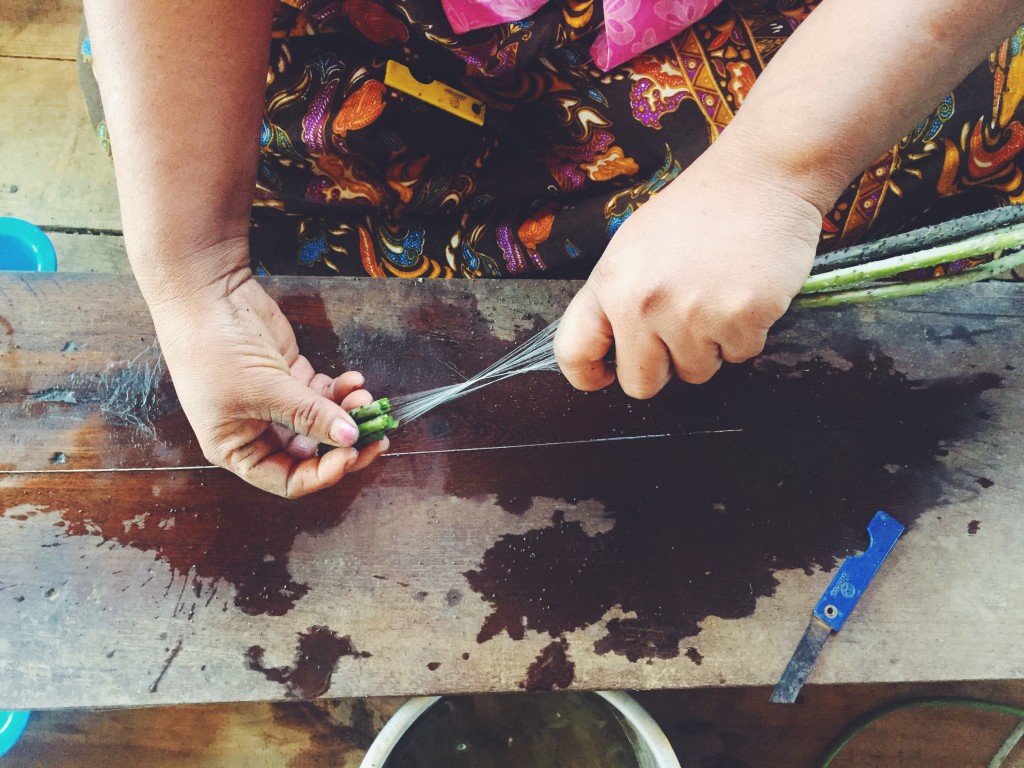 “Threads” from the lotus flower used for weaving 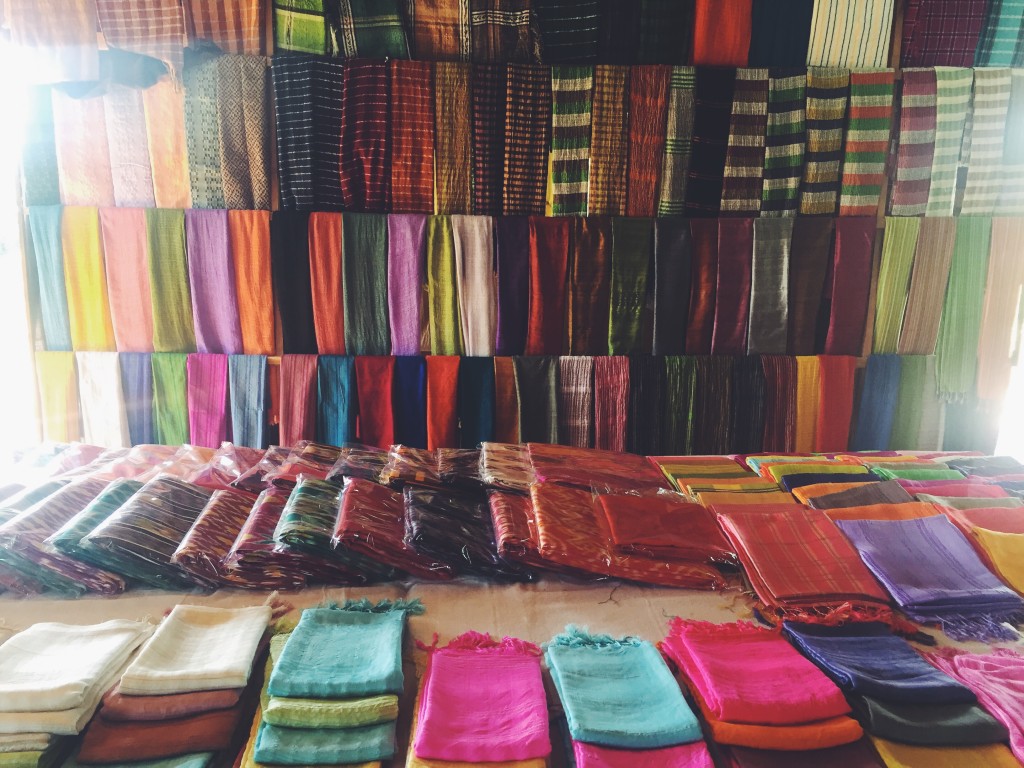 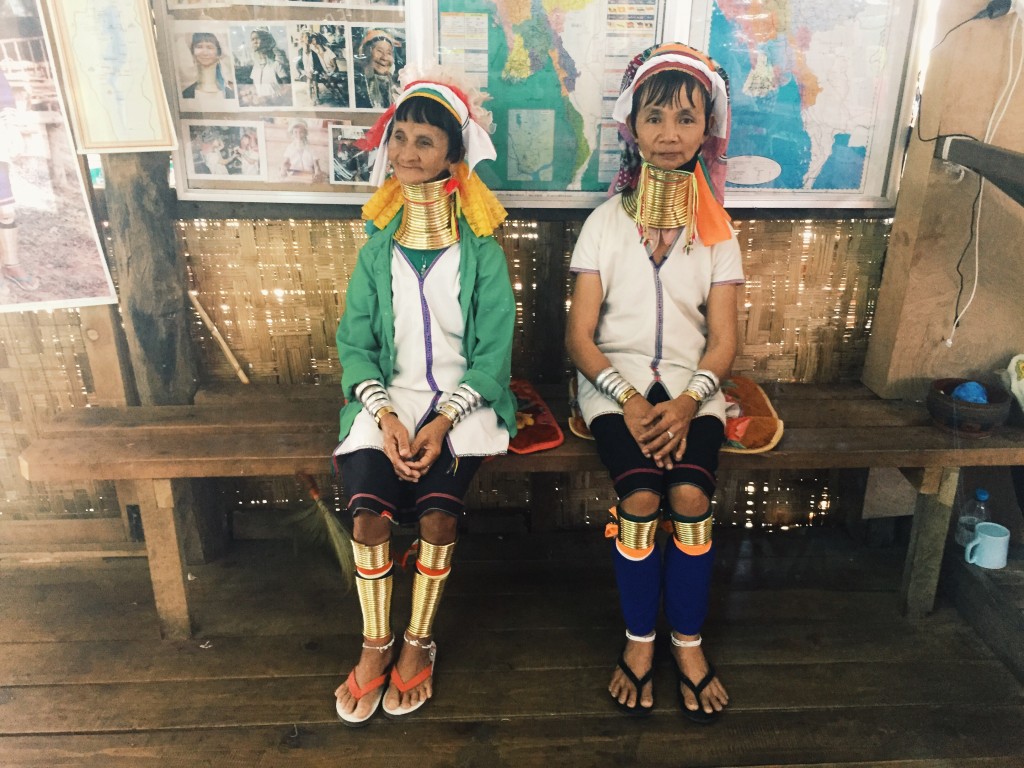 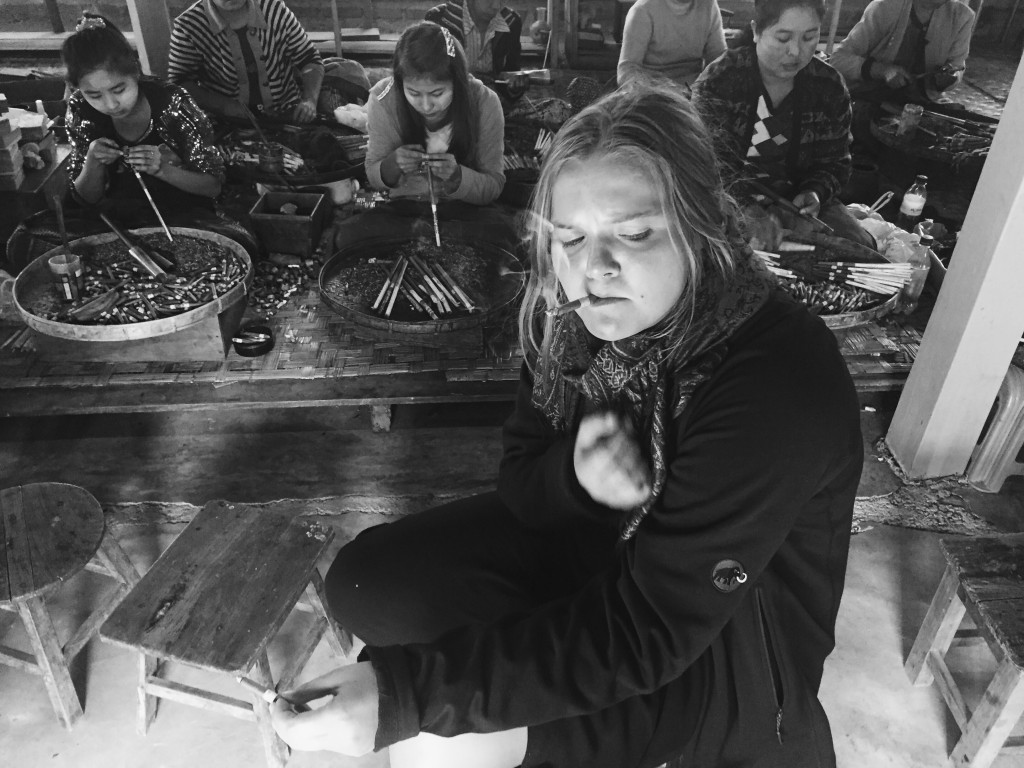 They see me rollin’

The morning was chilly, especially in the boat, zipping through the icy waters, so we warmed up with some drinks at lunch. Which we then took with us as roadies in the boat. Which got a little outta hand when we arrived at the blacksmith and completely overboard by the time we reached the silversmith (Alex gave the cats ridiculous names like “Jeremy” and chased them around the store, desperate for their attention and affection. The drunk shenanigans of a truly hilarious Englishman…) 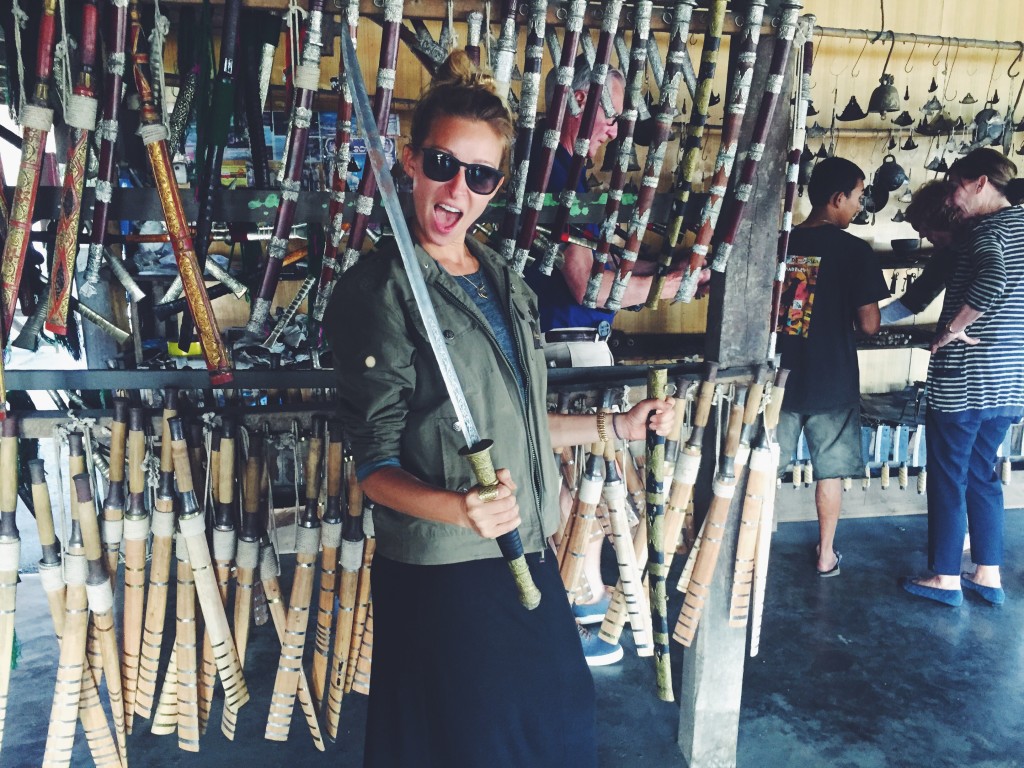 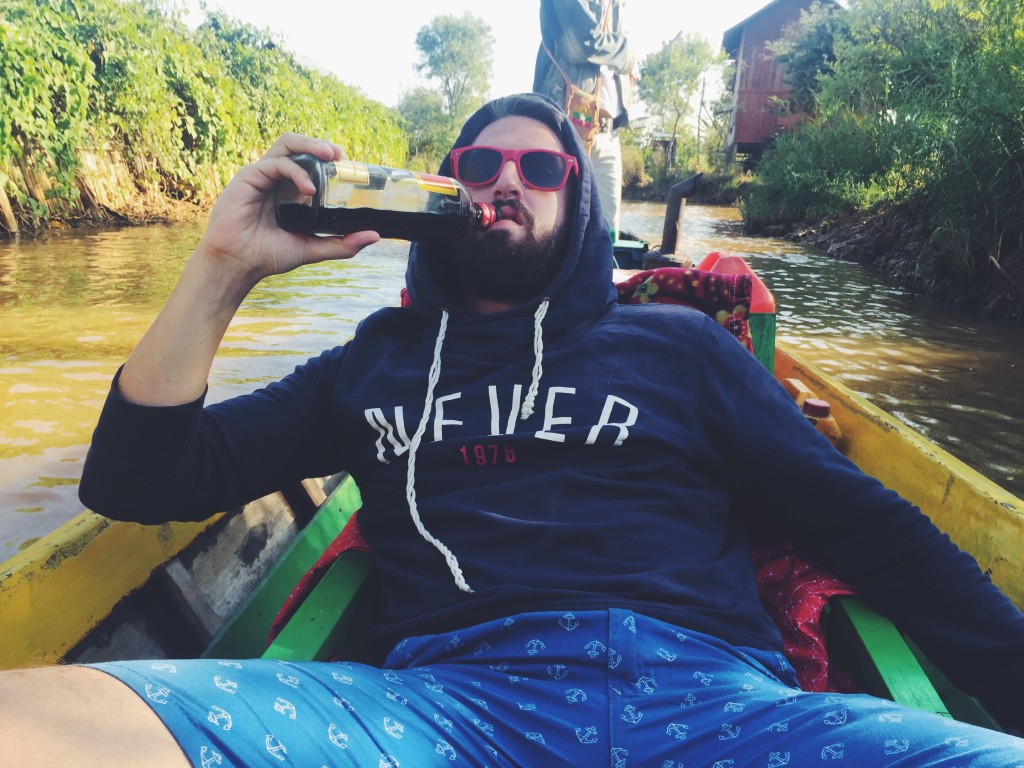 Alex in his element

The next day a friendly (and savvy) businesswoman with a little corner shop chatted with us, offering everything from bus tickets to massages. Seemed legit. We told her that’d we were keen for massages so while we waited we chatted with her and her adorable son played with Alex, sitting in his lap and crashing trucks into one another. The woman mentioned that the next day was her son’s 5th birthday. We asked her what the plan was. She said that she couldn’t afford a party, but they would probably go to the monastery. We decided then to get him a few little gifts (we later found a soccer and plastic tool set that he could bang around).

After 15-20 minutes four guys on motorbikes showed up and we each hopped on the back of one, speeding away to her home where women (who I’m guessing were her family members) rubbed and stretched us on the floor of their upstairs room. Afterwards we had the first of two meals at this amazing dim som place, where we gorged ourselves on steamed, stuffed dumplings, crispy duck and espresso martinis. It was the best food we had in Inle Lake – and that’s saying something because we had quite a bit.

On our last night we went to a party/concert in town that our friend from the shop had invited us to. We’d hoped to meet up with her beforehand and give her son his birthday gifts, but we got delayed at dinner and, sadly, didn’t see them again. Still, we walked ourselves to the party, following the music. The event was held at what I can only describe as a Myanmar community center. A shell of a building with cement floors and a large stage at the back where a woman was screeching into the microphone. We had assumed it was just a regular community event of no particular significance. Not so. When we asked our friend (a local guy we’d met that night who’s real name escapes me, but his Facebook name is VampireKing535… which will never escape me) he told us it was a celebration since civil unrest had just recently ended in their territory (but is sadly still very prevalent throughout many other areas of the tumultuous country). Well, alright then. I’d say that definitely calls for a party.

The band played songs that everyone seemed to know as they sang along loudly and joyously. To their delight, we sang along with them, making up the words that sounded like nonsense to us… at least I made up the words until I heard a familiar melody, with unfamiliar lyrics.

“…sometimes love don’t feel like it should, you make it (bum bum) hurt so good!”

Yep. The band was playing Hurt So Good by none other than Indiana’s own John Cougar Mellencamp, but everyone was singing the lyrics in Myanmar. Naturally I FREAKED OUT, threw my arms around some old Myanmar man and started belting out the words.

“You know this song?” he asked me.

“I was about to ask you the same thing, my good man.”

Now and forever Hurt So Good will make me think of the Myanmar’s slow progress towards freedom and democracy. Worlds colliding.

Inle is a great town to tour the lake, bike around, visit the monasteries and wineries, eat your way through great restaurants and cafes. It was the perfect place to relax after our eventful trek and gear up for the next leg of our journey back down south to Yangon. But before we left, we had one more thing to take care of… On our way out of town, heading towards the train station early that last morning, we stopped by our friend’s shop and between her sign and her shop door, we tucked the ball and tiny tool set. The thought of him coming upon his gifts that morning makes me smile with sneaky satisfaction even now.