One of my lifelong travel dreams came true when I was able to visit the haunting and impressively beautiful temples of Angkor Archaeological Park, just outside of Siem Reap, Cambodia. Plans for the next leg of my trip finally came together (after much agonizing thought, worry, planning and nagging of my BFF Laura about what I should doooooooo). But that only left me enough time and energy to visit one place in Cambodia. Picking Angkor Wat was a no-brainer as it was towards the very top of my list of places to visit when I started this journey.

But here’s something I have to admit: while I’d dreamt of visiting this historic site for a while, it was mostly based on its beauty alone. I knew nothing about its history, significance or the deep impact it had on both ancient and modern Cambodia. Thankfully my pals Kaitlin and Erin from Don Det advised me to seek out Mad Murphy’s Pub – an Irish bar in Siem Reap that shows a documentary on Angkor Wat everyday at 3pm. It was fascinating, informative and provided awesome context for when I was touring the temples. 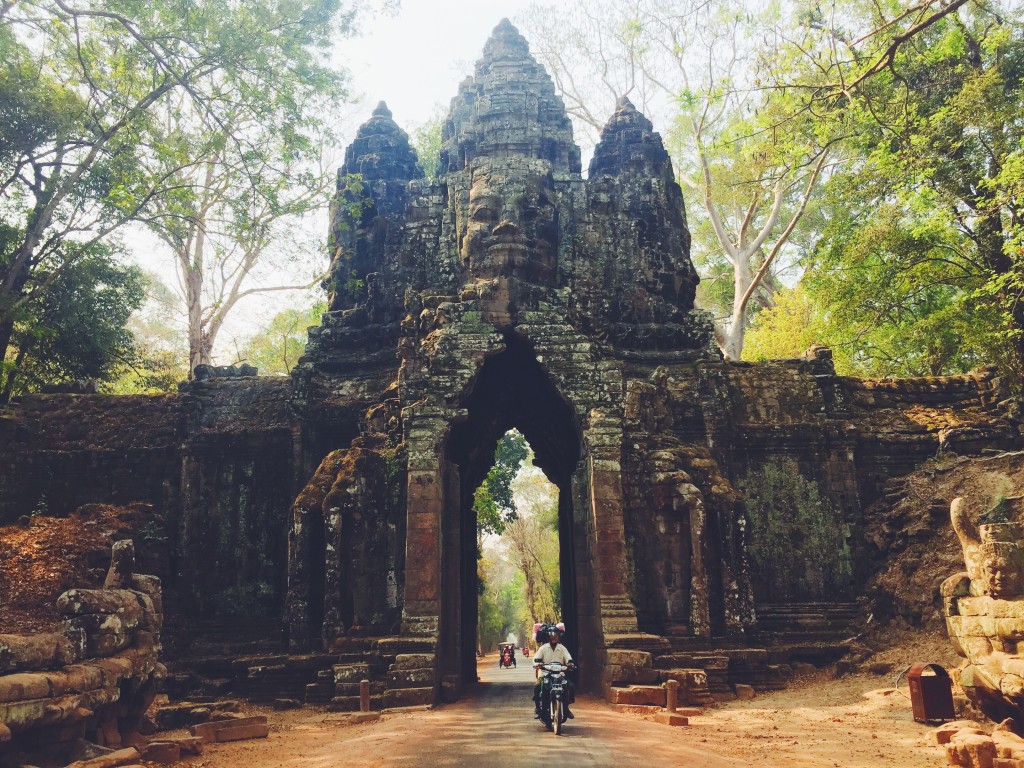 Touring around the grounds of Angkor

Bear with me here cause it’s history lesson time, but it’s a doozy (and I’ll pepper it with pretty pictures). Angkor Archaeological Park is roughly 400 square kilometers in size and contains hundreds of temples and buildings that were the heart of the Khmer Empire from the 9th-15th century. At the peak of the Khmer empire it’s projected that around 1 million people were living here. ONE MILLION! That’s insane. To give you some context, about 30,000 were living in London at that same time.

The centerpiece of every visit to the park is Angkor Wat, which is actually the name of the main temple and not the entire site, as I have previously thought. Angkor Wat is the largest religious monument in the world and includes elements of both Hinduism and Buddhism. Because of the empire’s massive population and thanks to the thousands of elephants that also resided here during that time, Angkor Wat was built in under 40 years. I cannot begin to impress upon you how unbelievable this is. The size, beauty, complexity and detail of this building is mind blowing – and to think that it was constructed in such a short amount of time without the use of modern equipment… I just can’t even… 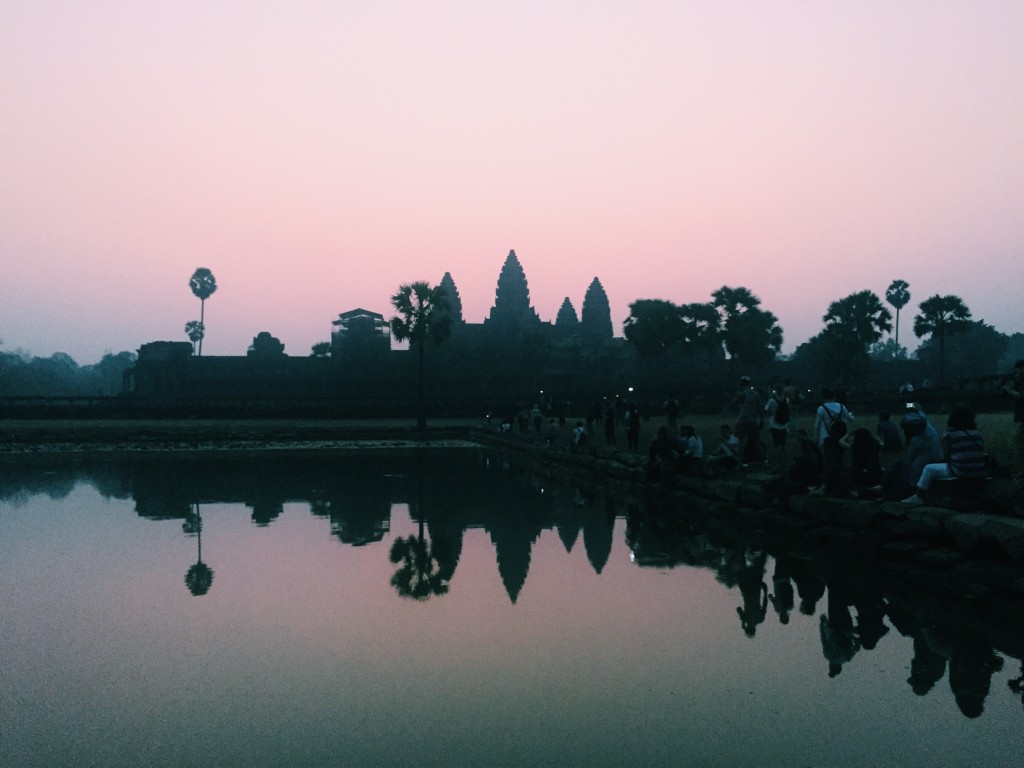 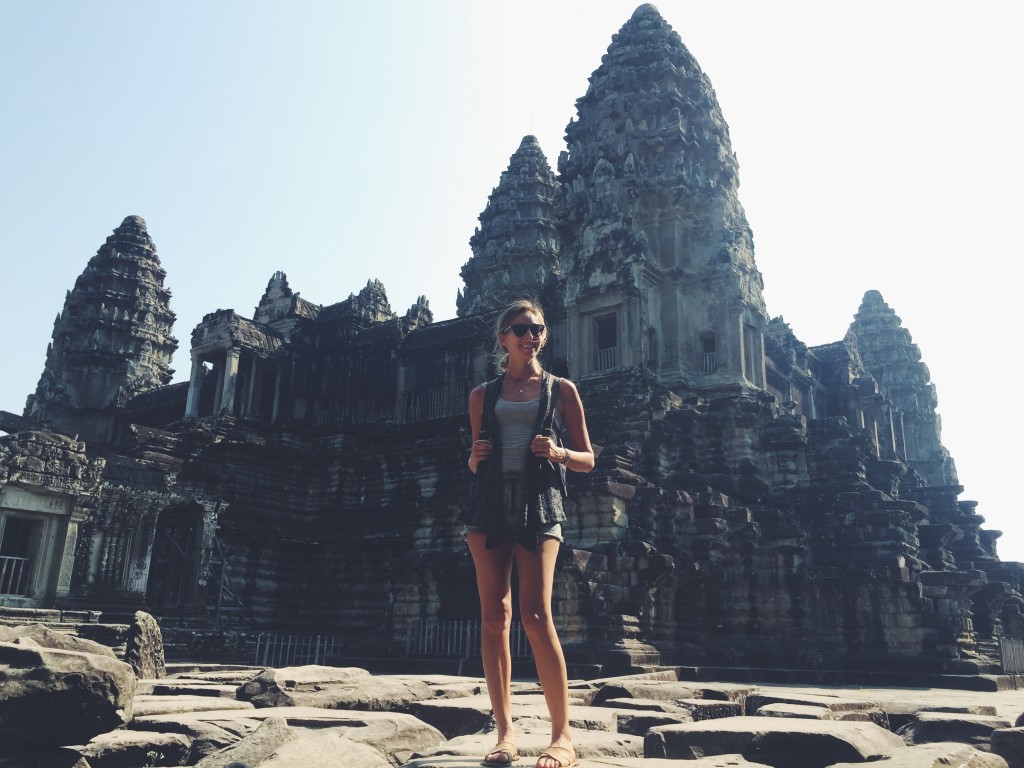 Inside Angkor Wat – the five towers were designed to resemble a closed lotus blossom!

Other buildings of significance are Angkor Thom and Bayon Temple. While Angkor Wat was very, very impressive, I have to say that I actually felt Bayon was superior in its beauty and interest. The temple is decorated in massive stone faces that peer down at you from all angles. It’s haunting and just… I don’t know… magnificent!

Around the grounds at Bayon 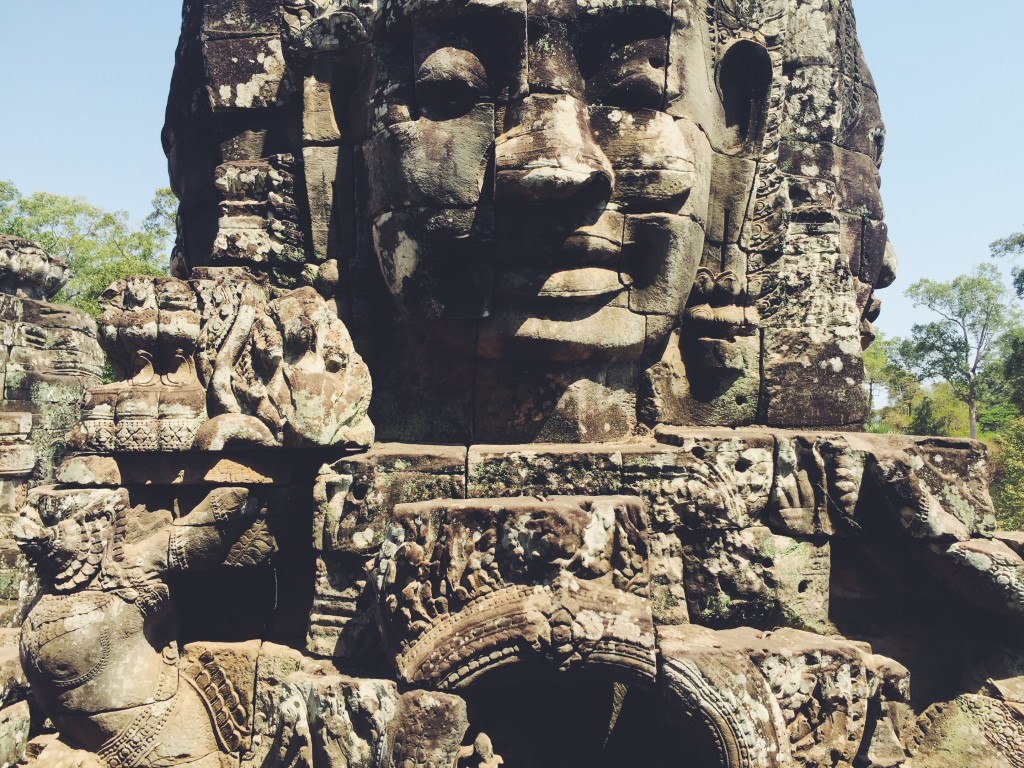 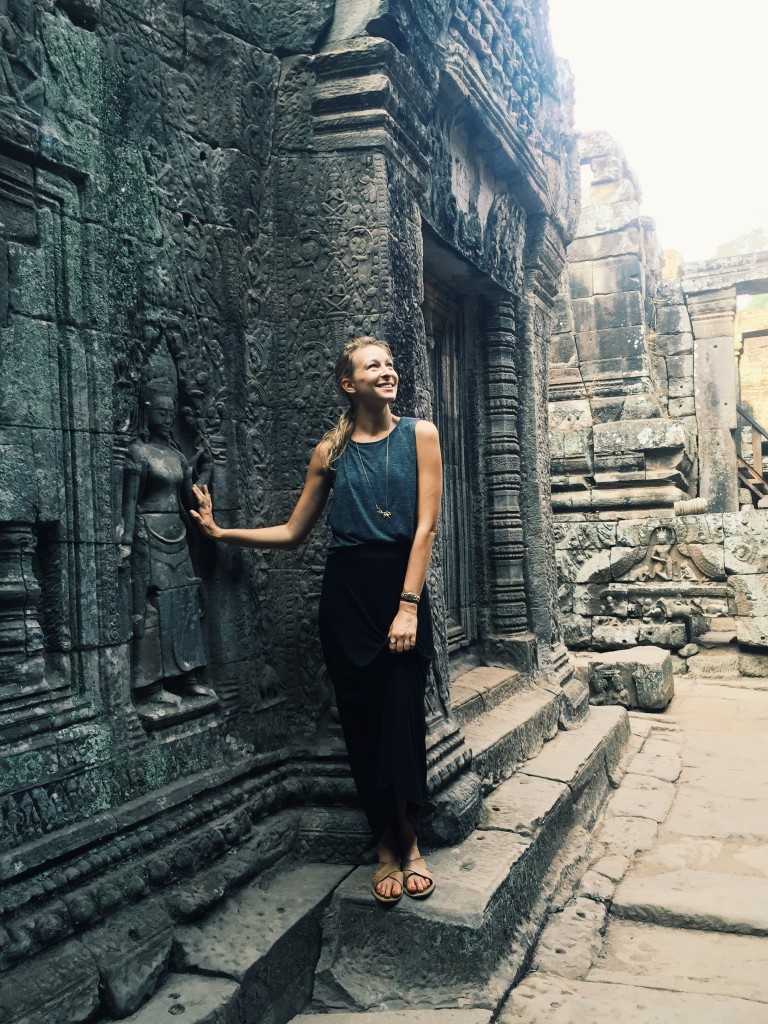 After being raided and coming under Thai control, Angkor was almost entirely abandoned in the 15th century and not “rediscovered” until the 1860s by the French. Though incredibly well-preserved, the temples of Angkor suffered from the encroaching Cambodian jungle, natural disasters and, most of all, looters. Restoration of the site began in 1907, but was halted in the 70’s during Cambodia’s Civil War and the rise of the evil Khmer Rouge regime that left more than a million people dead in under five years. Angkor Thom (now commonly referred to as the “Tomb Raider Temple”) was left in a partly overgrown state so that visitors could experience it as the French archeologists had, with massive trees and roots growing in, around and through the ancient landmark. 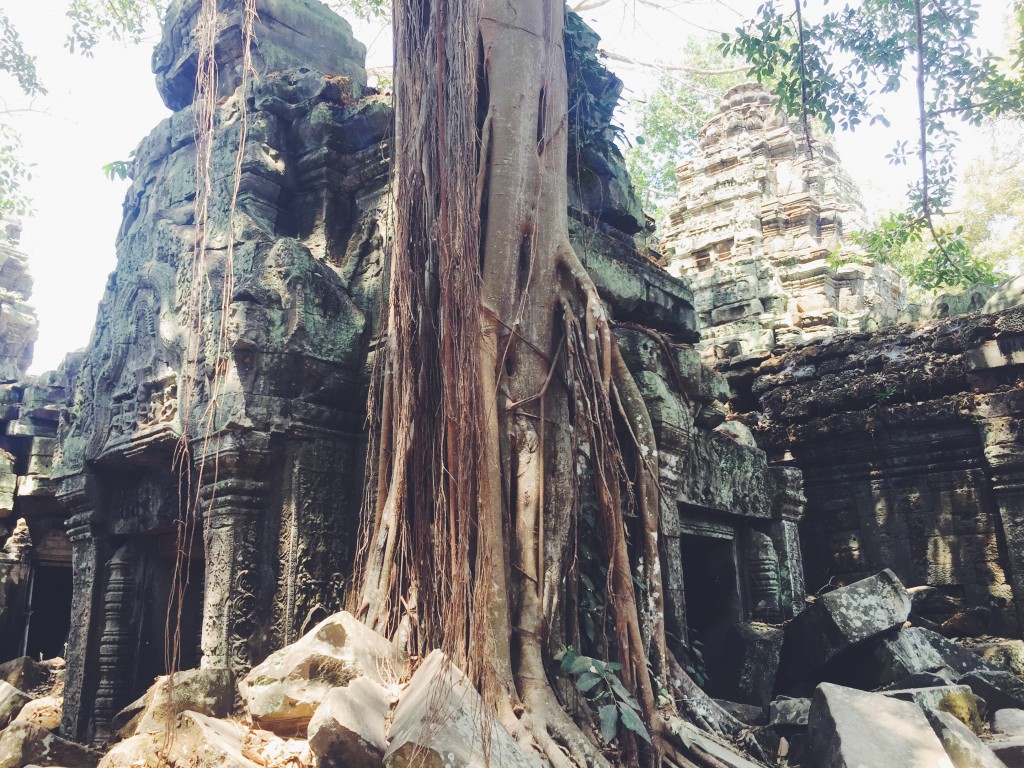 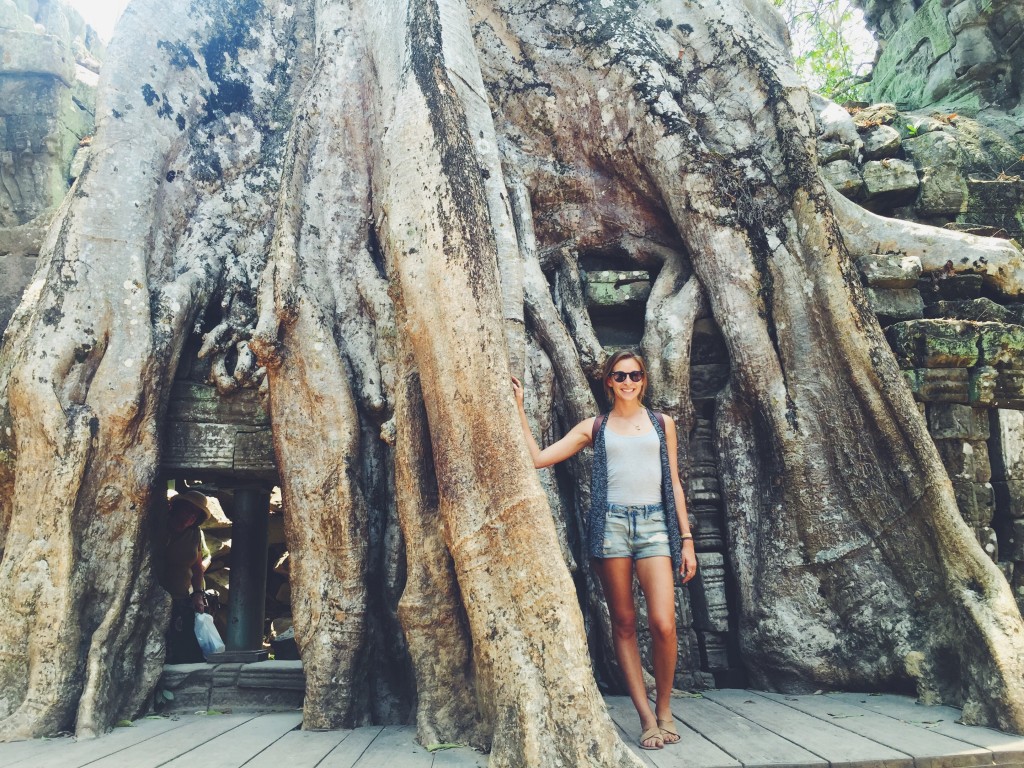 Angkor was named a World Heritage site by UNESCO in 1992 and this year Lonely Planet called the Temples of Angkor the #1 site to visit in the entire world! Miss Marge agrees, Lonely Planet 😉 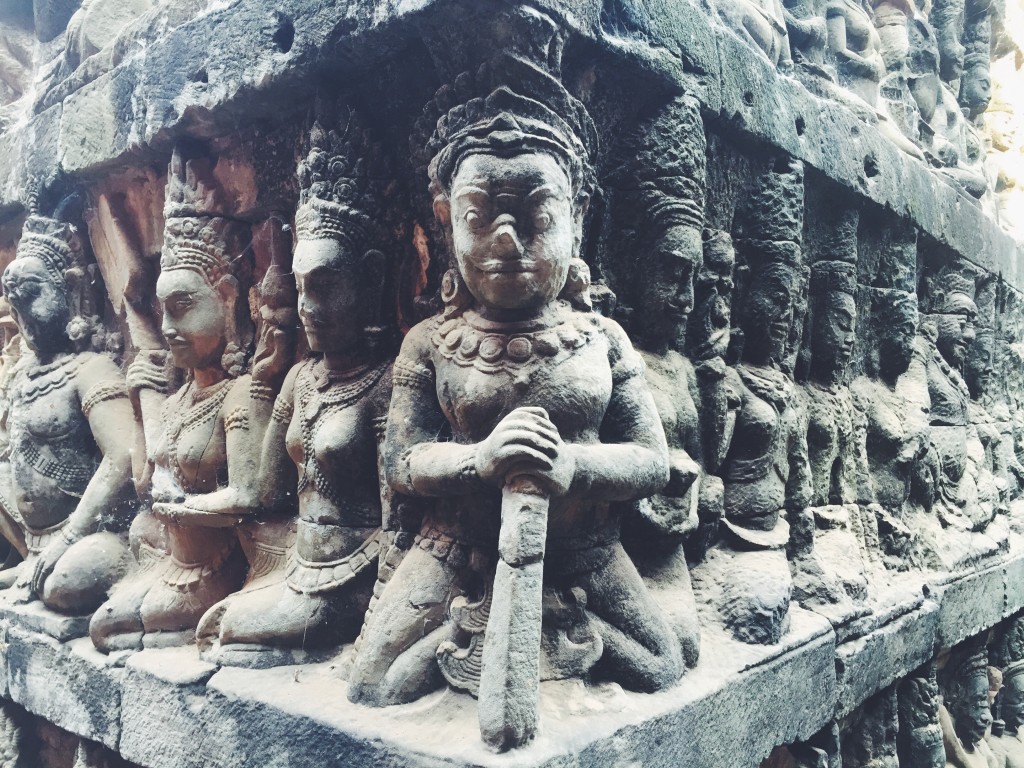 How freakin’ cool is this?!? 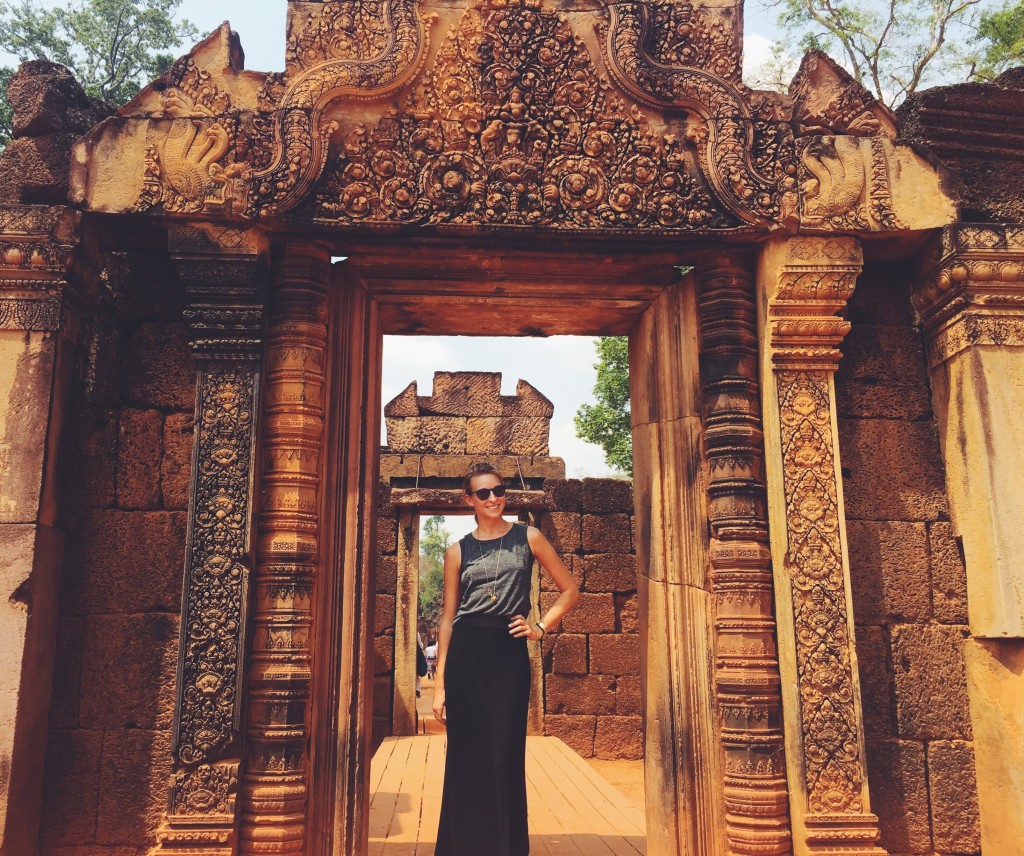 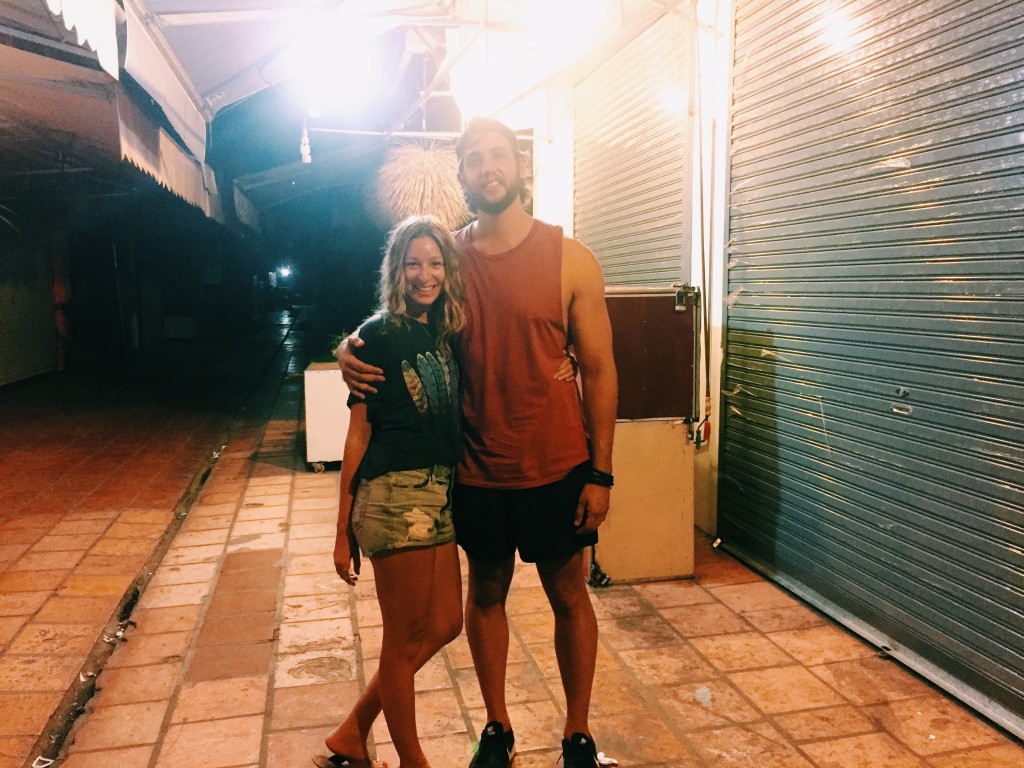 Met Josh at sunrise at AW and had a buddy for the day! Thanks for the company and convo, mate!