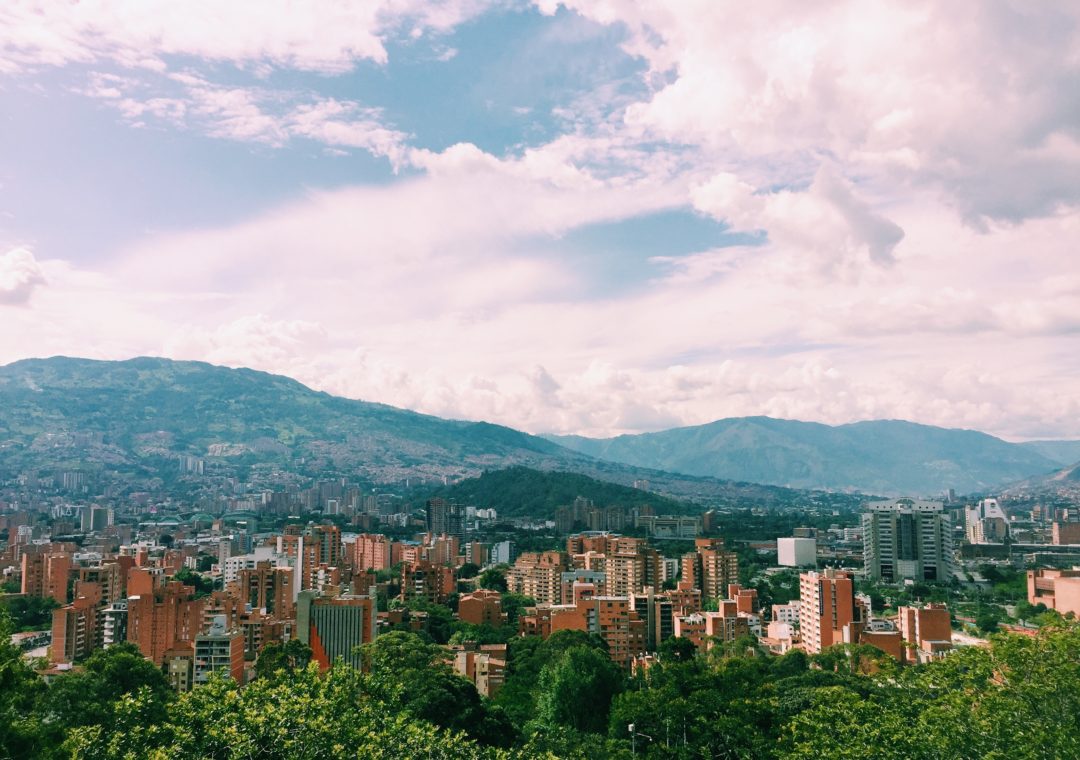 Medellin has a reputation that precedes itself among travelers. When you get to a country you invariably start talking to other people about where they’ve been, where they’re going, which places stand out, etc. Everyone who had previously been to Medellin raved about the city (not surprisingly, Zane referred to it as “the spot”) and some even made second (and third) trips there while traveling throughout Colombia. One of these people was Ryan. Ryan is a Canadian who DJs in his spare time and is one of the best conversationalists I’ve ever met. We met in Minca, ran into each other on our last nights in Santa Marta, and happened to be on the same flight the next day to Medellin. He’d already been to Medellin (twice) and let me tag along when he made the rounds to all of his favorite places. He knew the best restaurants (one being Cafe Zobra which boasts some of the best pizza I’ve ever had anywhere), which parks to head to at night (Parque Lleras), how to use the metro and he even had some friends who were still in town.

Medellin’s reputation is one of a really livable city. It’s cosmopolitan, modern and boasts an awesome metro that makes getting around really easy. There are wonderful (and varied) restaurants and bars, boutique shopping, nice parks/vistas to visit. It’s also incredibly beautiful, which is something I had not expected. Set in a bowl surrounded by mountains, the city is massive and sprawling, expanding out instead of up, making it appear three times its actual size. Because of its altitude, the weather in Medellin is constantly like those Indian Summer days that are so few and far between elsewhere. It’s warm, but not hot or humid and the breeze is a cool. It’s perfect. All of this makes Medellin a great place to post up for an extended period of time, which is exactly what I did. 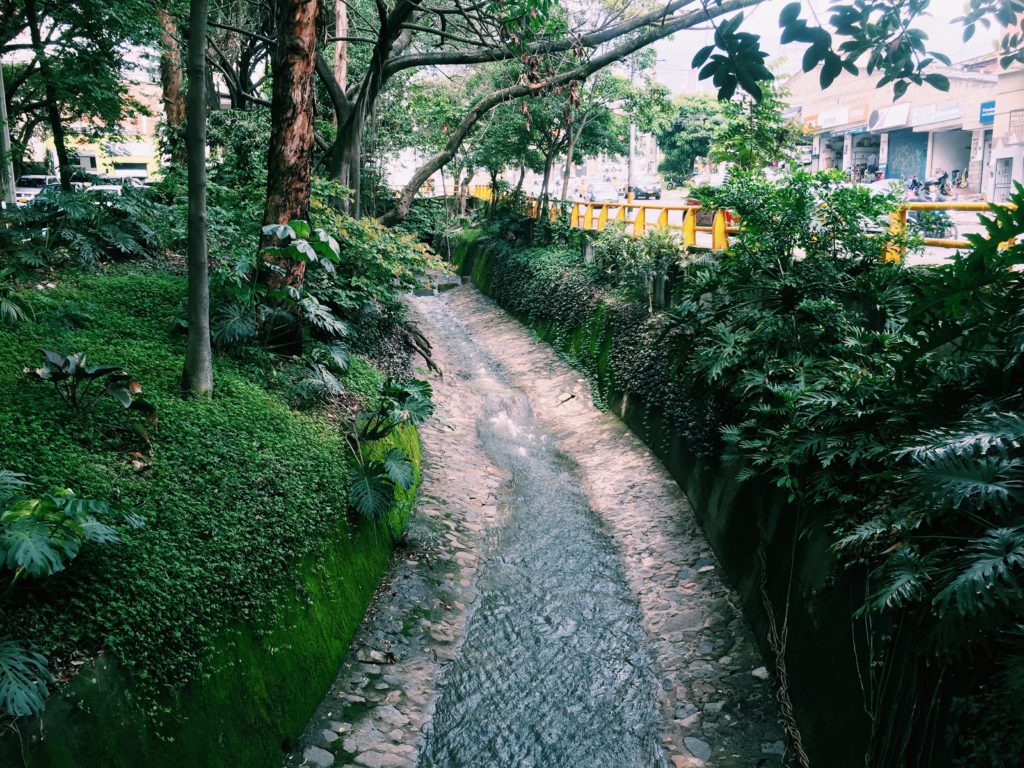 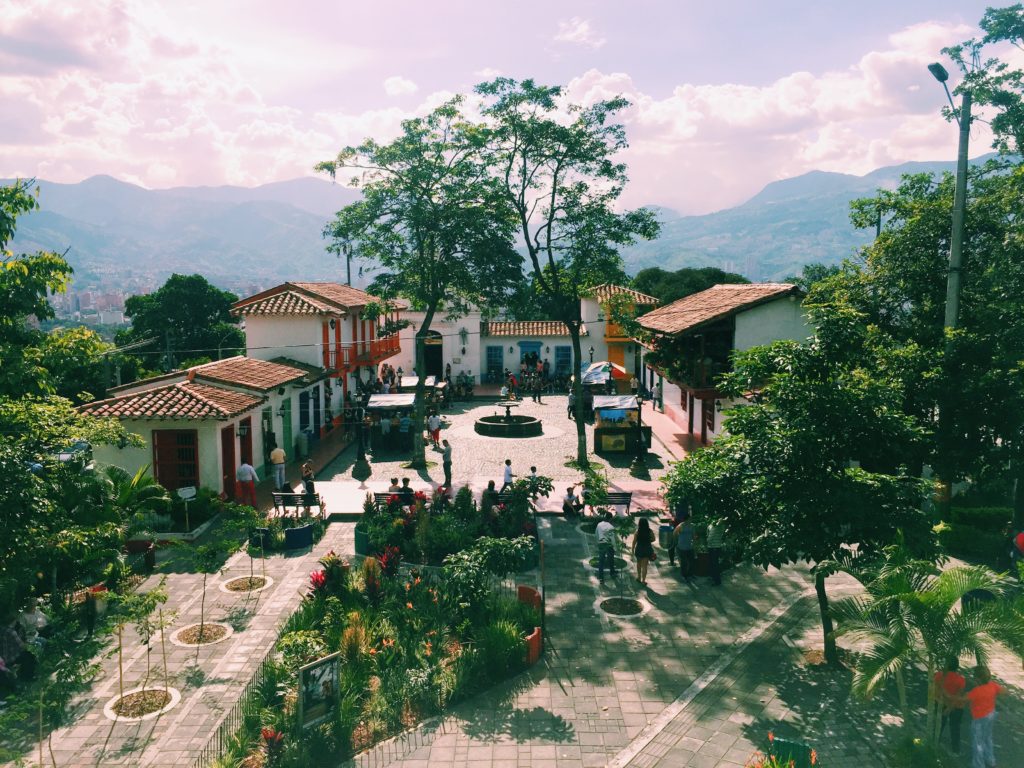 I stayed at a quiet, sleepy hostel (Galería Estación) on the edge of a trendy neighborhood called Poblado. This is my MO: stay somewhere quiet where you can hang and actually get some sleep when you’re ready to call it a night and visit the party hostels when you want to do just that: party. The dorms at Galeria were dark, quiet and cold. In other words, a dream. Galeria was so comfortable in fact that it wasn’t uncommon to spend your entire day there. People would sit around reading, writing, listening to music – some would play chess or just chat.. These were the types of moments I had hoped for when starting my trip. They’re profound in the simplest of ways. It’s comfortable, easy – there’s no schedule or agenda. No one feels antsy about doing “nothing.” They give me the same feeling I had in college with my friends – the feeling that the days were endless. Which, of course, is not true. 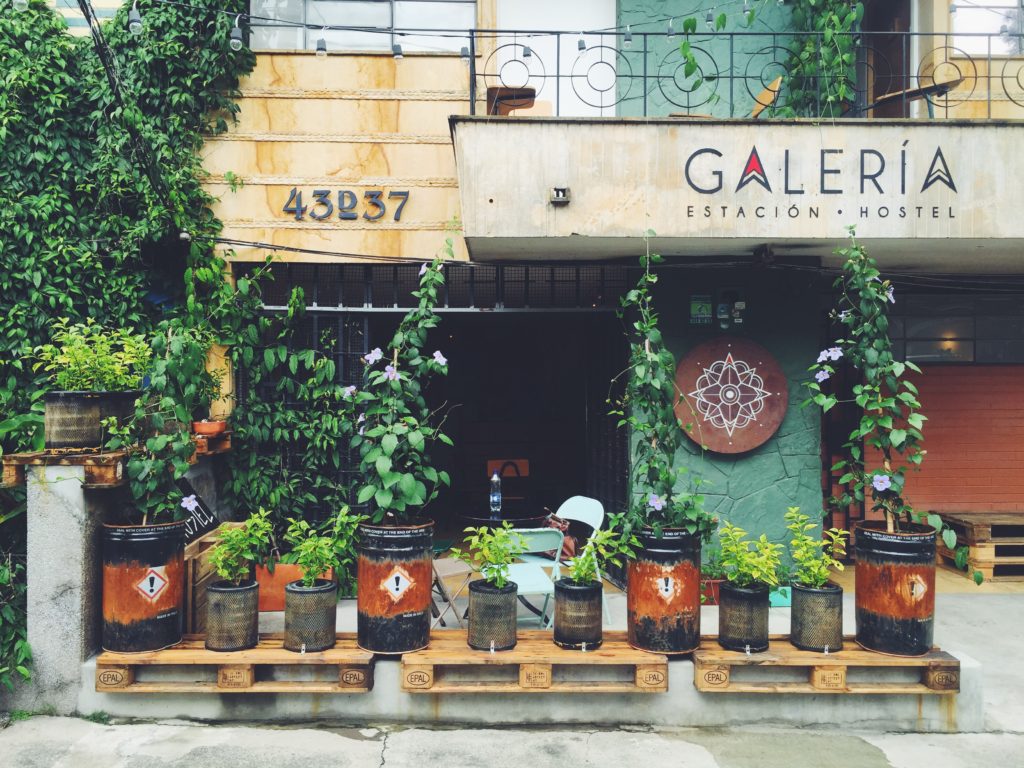 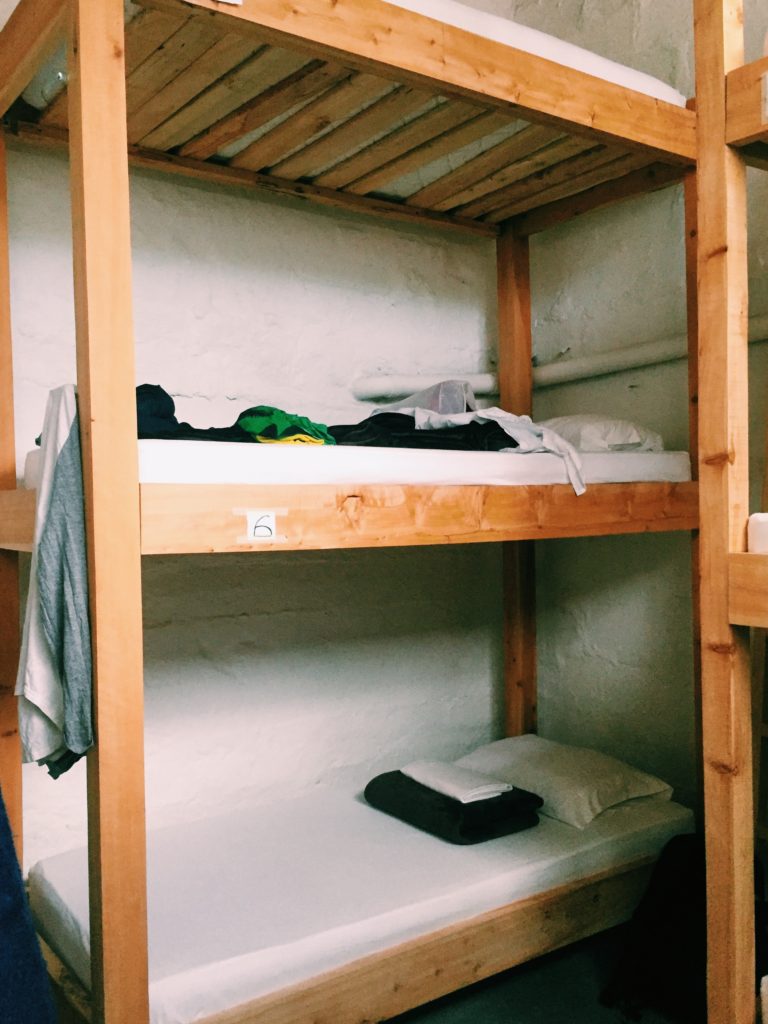 Standard operating procedure at Galeria with Kasper and Daniel 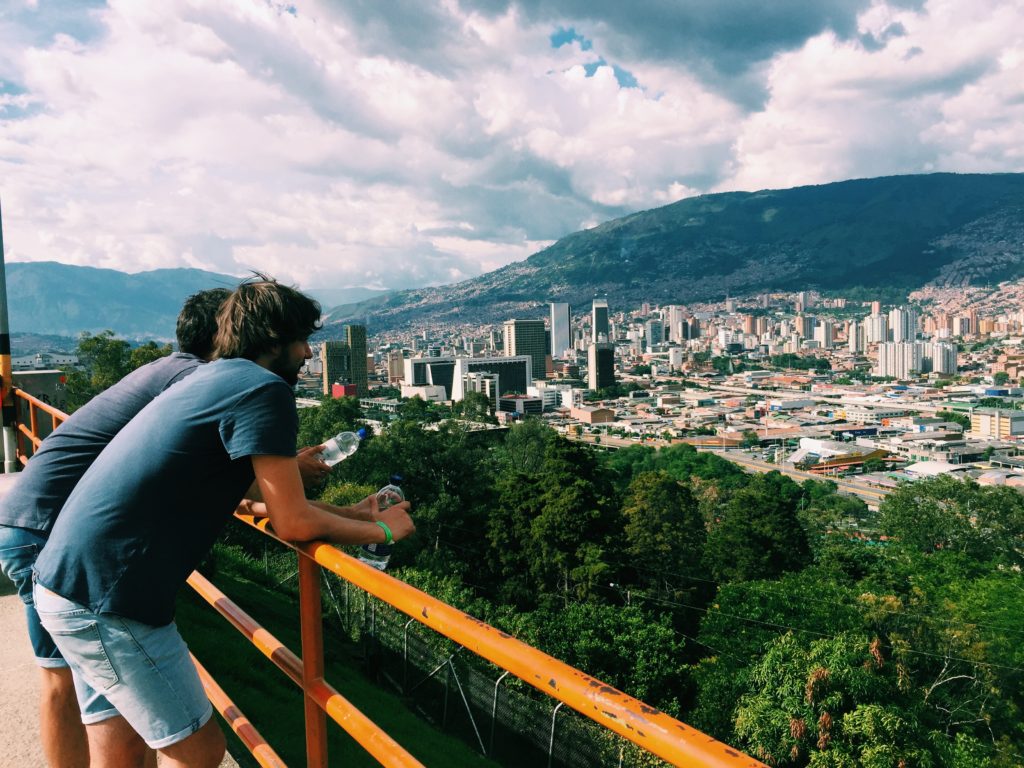 Views on views in Medellin

Medellin and favelas from the cable car 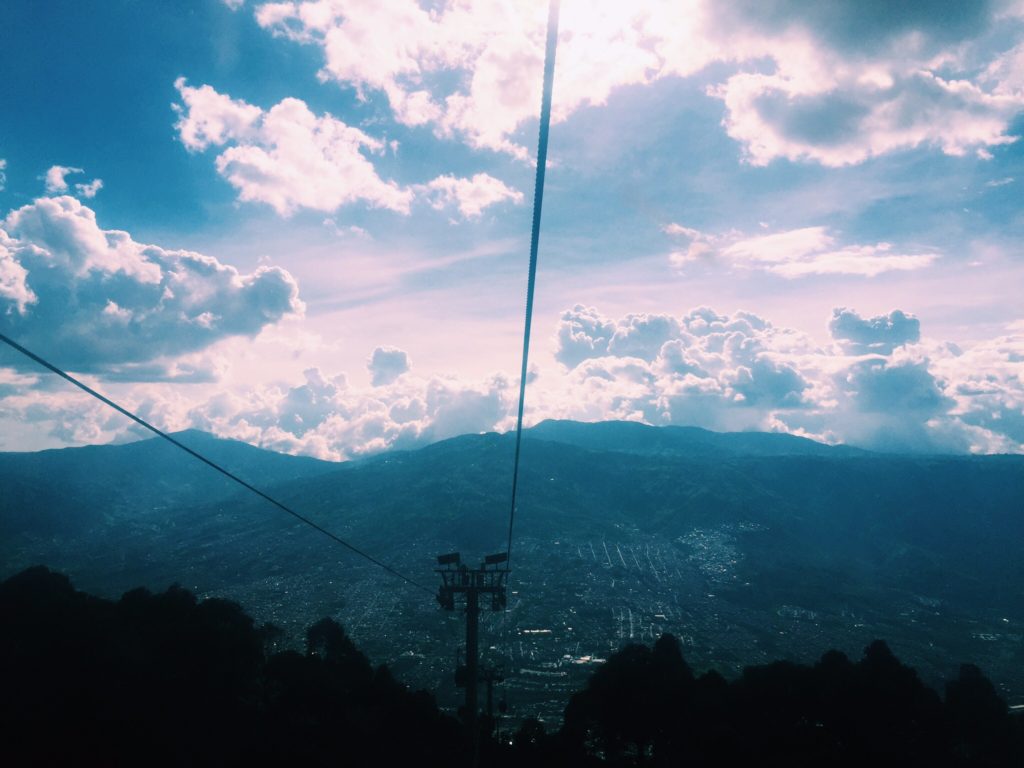 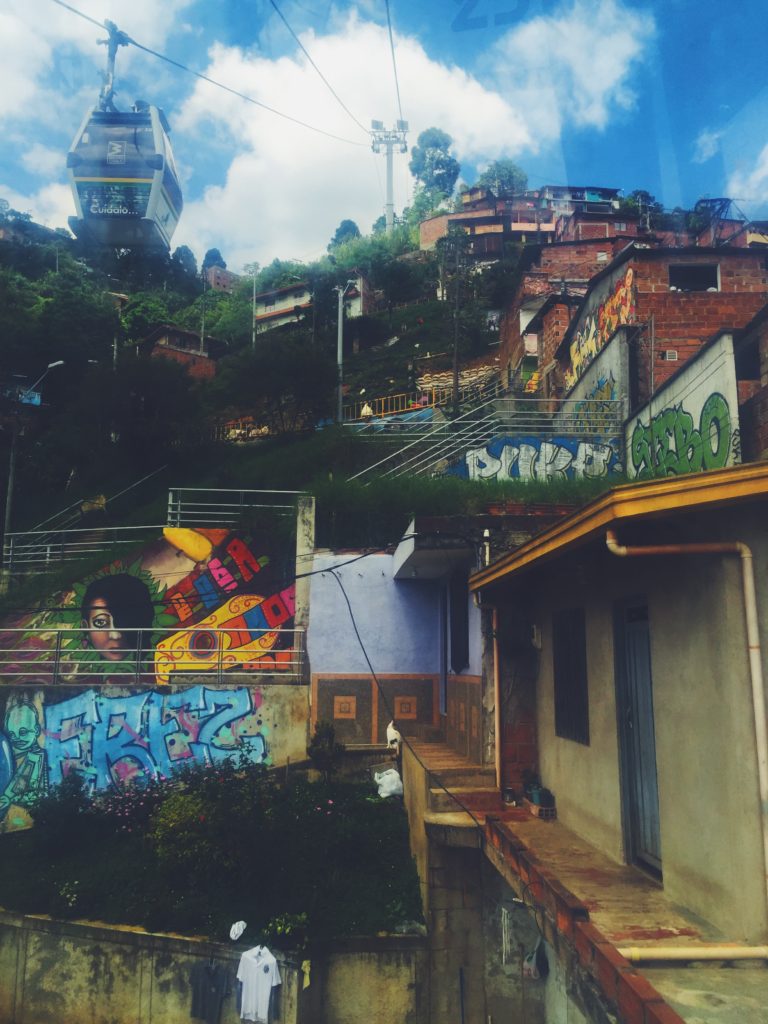 Una mas of the favelas from the cable car

Kasper and I gettin’ real laid back

One day the three of us took a day trip out to Guatape for the infamous climb up the stairs that lead to a viewpoint, which claims to be the best in the world. I’d seen some pretty spectacular views throughout my trip, but Guatape definitely lived up to the hype (and I’ve got the 100+ pictures to prove it). 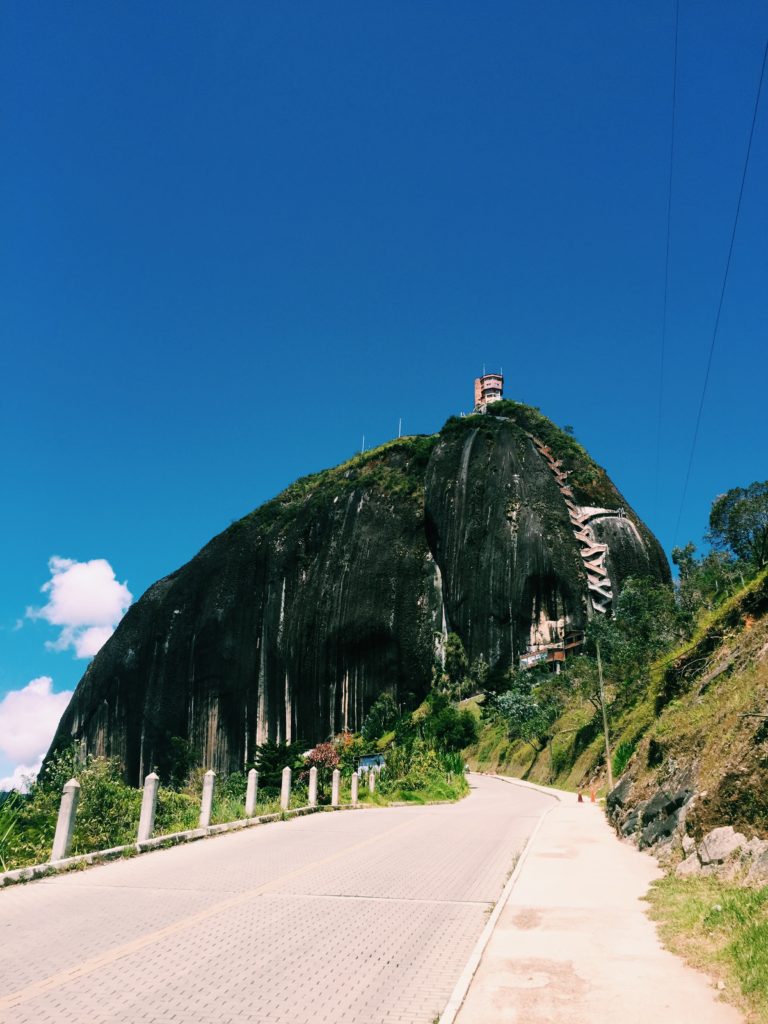 The climb in Guatape to El Penol (yes, those are stairs). 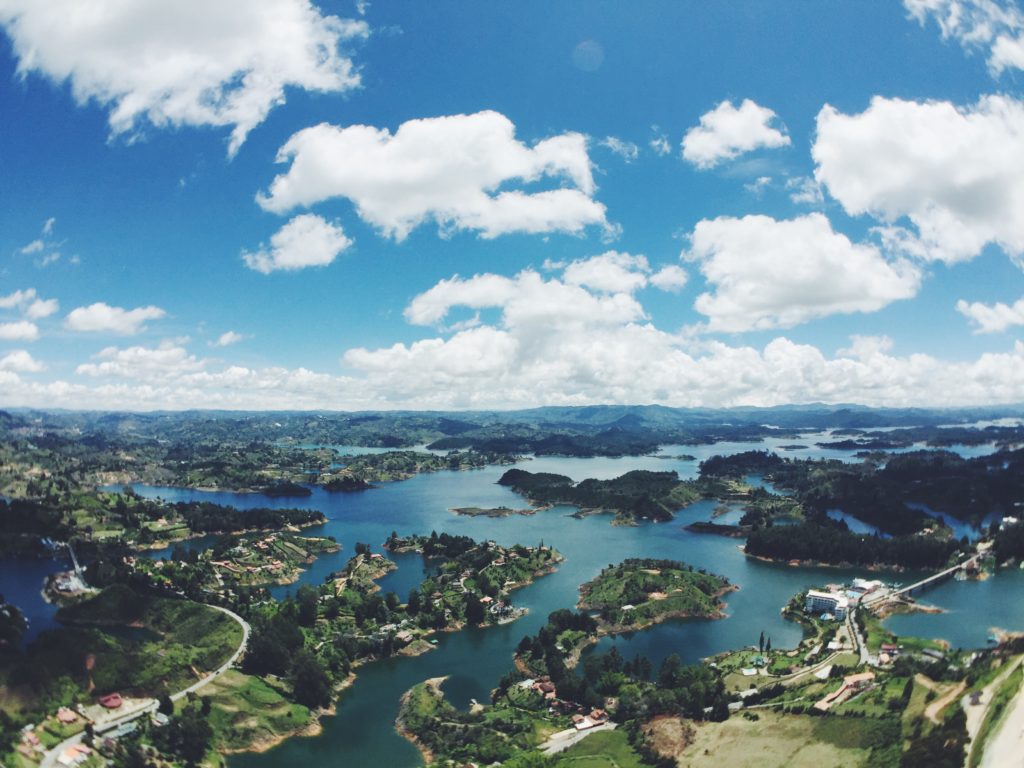 The pay off at the top 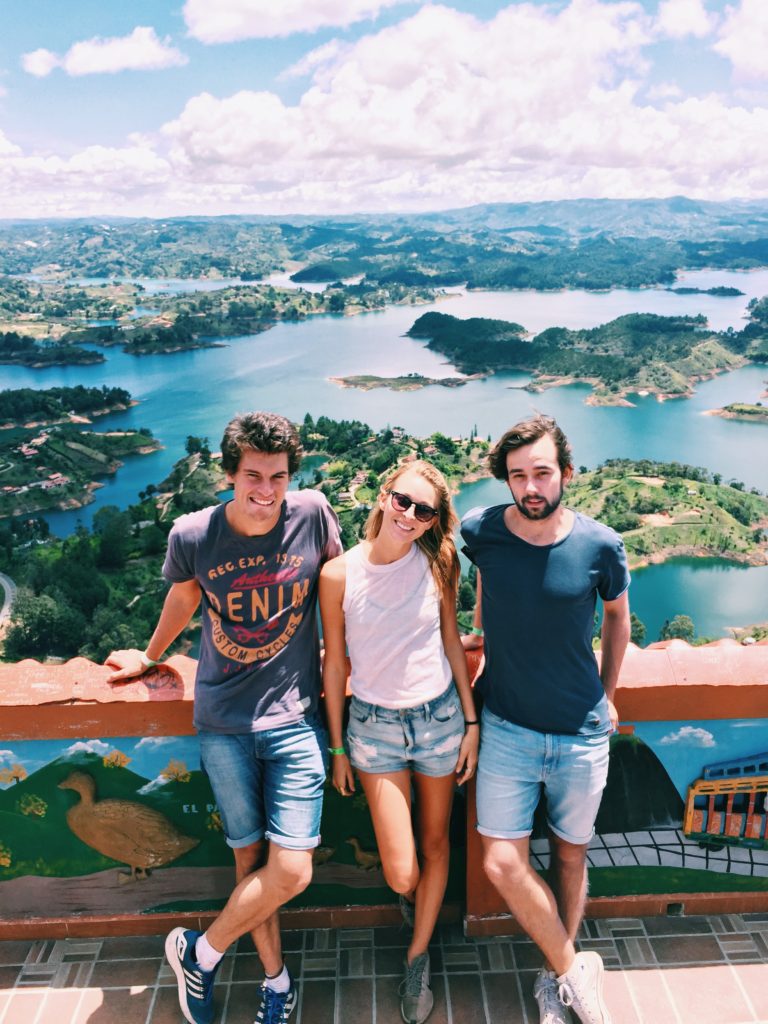 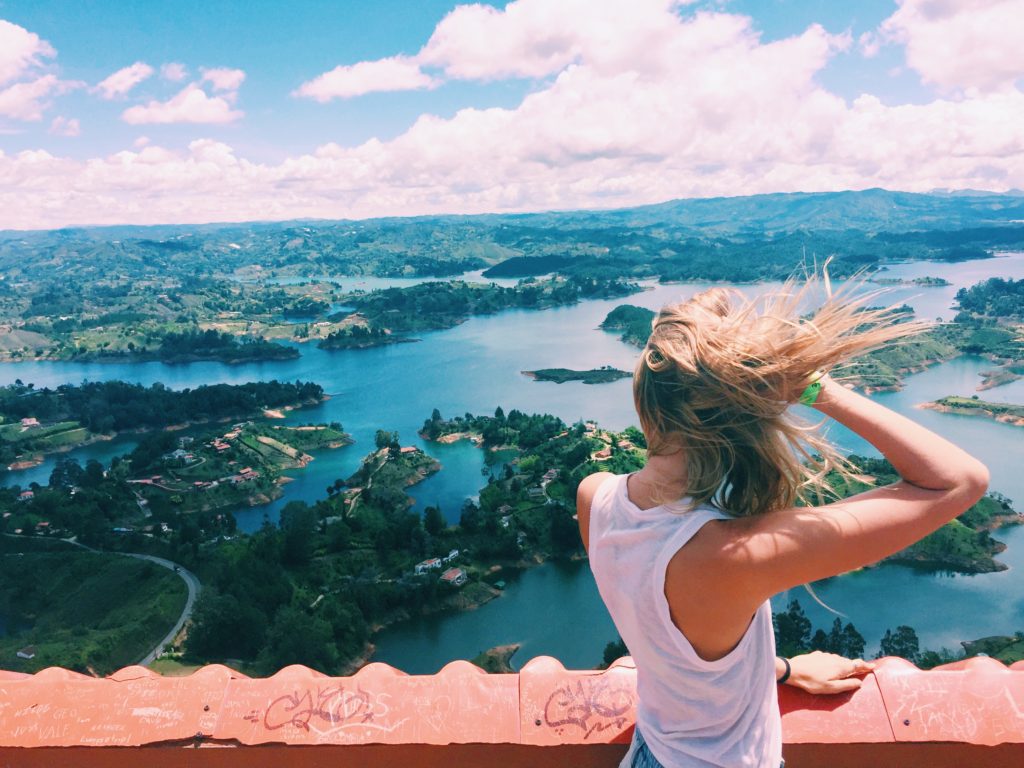 I can’t stop with the pics of Guatape

We sat up there taking pictures and admiring the views until it was time for lunch, then climbed down and took a tuk tuk into town for the standard soup, rice, beans, chicken, etc. Afterwards we meandered around the town. If you’re game, there’s also paint balling near Guatape at an old, abandoned mansion of Pablo Escobar. I opted out of this after seeing the welts of others, but everyone raved about it so I kicked myself a bit for chickening out. 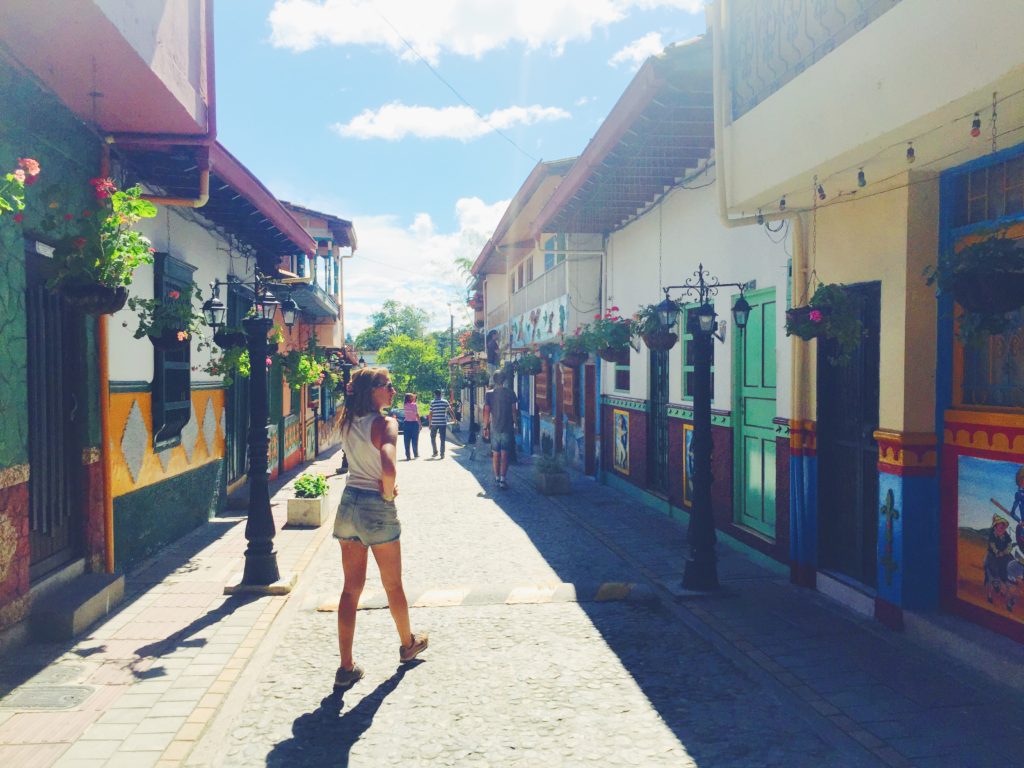 The three of us took a last minute dip in the lake in our undies despite questioning stares from locals. Apparently people don’t swim in the lake (or at least not in that part), but we couldn’t see why not. It was clean enough and we were hot, so we swam. When we went to to catch our bus back to Medellin we were told that they were all full, but lucked out with step seats (not the most comfortable of rides, but it worked). I took a much needed nap on Kasper who acted as my seat belt, keeping me from nodding off head first into the aisle. Pro tip: if you take day trip to Guatape instead of spending the night, buy your return bus ticket as soon as you arrive in town.

Back at the hostel after Daniel and Kasper left for the north, I buddied up with Am (an adorably upbeat English girl and Oscar (a native Aussie who had lived in England, but was now traveling/working his way through South America.  Am and Oscar were friends from London who had met up previously in Argentina and then again here in Medellin. When we weren’t watching movies or soccer games at the hostel, we spent the evenings drinking beers in the park. This is actually one of the biggest evening pastimes in Medellin and, indeed, all over Colombia. Before, after and in-between trips to the bars, clubs and dinner, you stop off at the park to have a beer, talk and people watch. It’s sort of odd at first if you’re not used to it, but I kinda like the tradition. Oh and they set up enormous screens in the parks during soccer games, which is a really fun atmosphere. 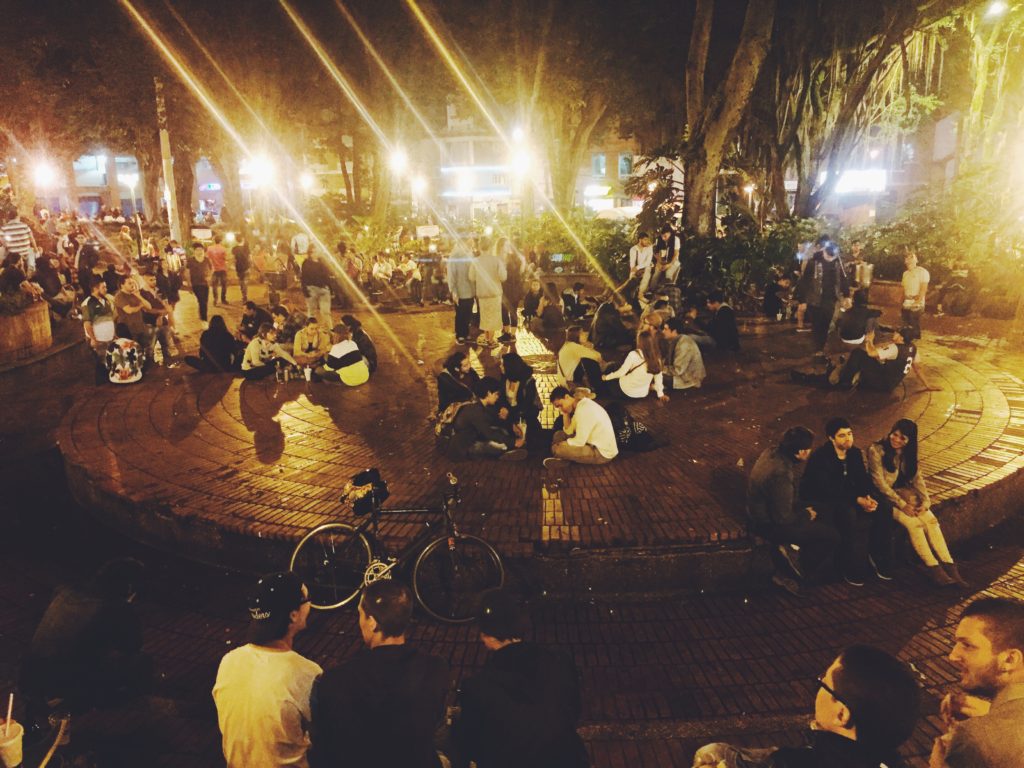 One day Am, Oscar and I braved the real deal and went to a soccer match, which was…intense. Ryan had told me about his soccer match  experience in Cali where he and a friend sat in the rowdy local section. And when I say rowdy I mean that there was a mosh pit at one point and dudes doing lines of coke off of machetes. Next. Level. Rowdy. We wisely opted to sit in a much more tame section (our Spanish wasn’t good enough to talk us out of weapon/drug situations).

When they scored, thousands of rolls of toilet paper were thrown from the stands which answered my daily question: “Where the hell is all of the toilet paper in this country?!?” Cause it’s not in the bathrooms, I’ll tell ya that. To tell the truth, the match was fairly boring and uneventful… until the end. It ended in penalty kicks that went shot for shot, miss for miss, back and forth for a very long, tense time. In the end, Medellin pulled out the win which prompted grown mean to sobb. Not shed a tear. Not tear up. SOB as if their son had just returned from war. I excitedly grabbed one such man and jumped up and down with him as he wept. He just seemed liked he needed a hug. 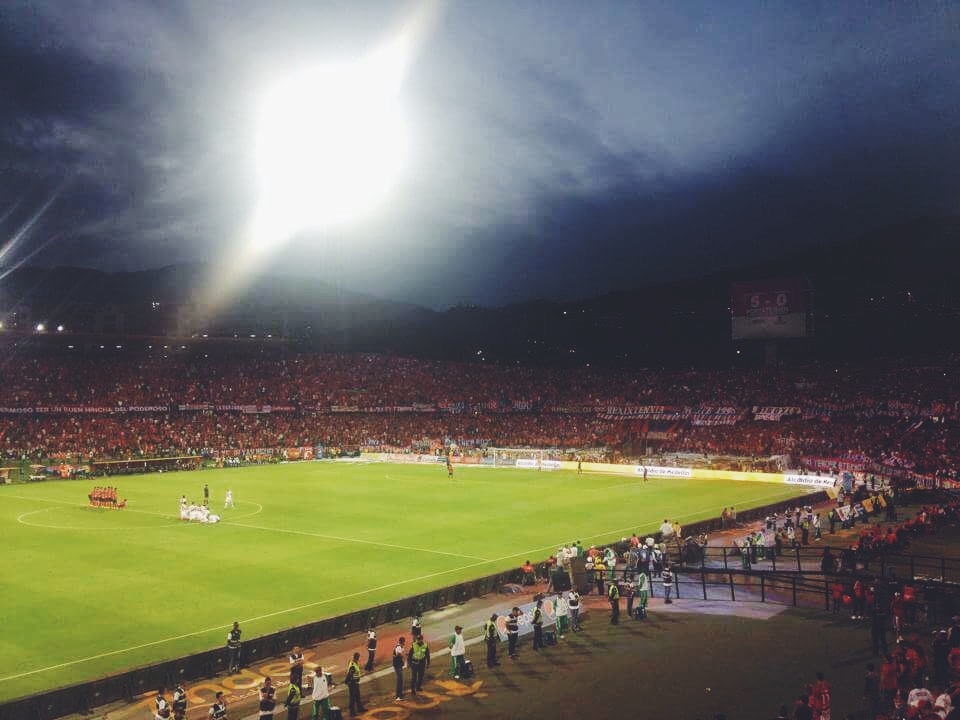 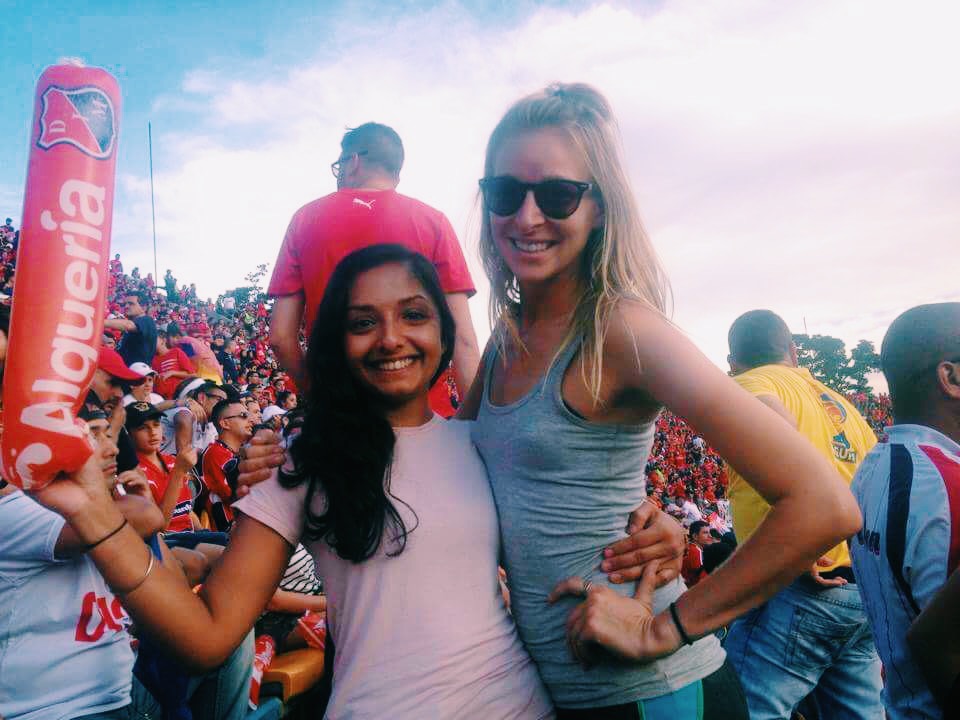 Am and I gettin’ in the spirit

Towards the end of my time in the city, I learned a lot about the history of both Medellin and Colombia in general during the *Real City walking tour, which is a can’t-miss to-do in Medellin. Our guide was fantastic – entertaining, informed and very candid about his own personal experience. Of his eight best friends from childhood, six were dead thanks to violence surrounding the drug cartels in the 80’s and 90’s. His family, which was once relatively wealthy, lost their fortune in ransom money. He took us places where bombs were exploded and politicians were assassinated. He pointed out prostitutes and drug dealers and told us when we needed to move our backpacks from our backs to our fronts and stay close together. Don’t get me wrong, he showed us the beautiful stuff too, but I appreciated just how honest and open he was. In reality, these things can be pointed out in most major cities around the world. I liked that he gave such a well-rounded look at Medellin, which is complex and rich not just in spite of, but because of its dark past. 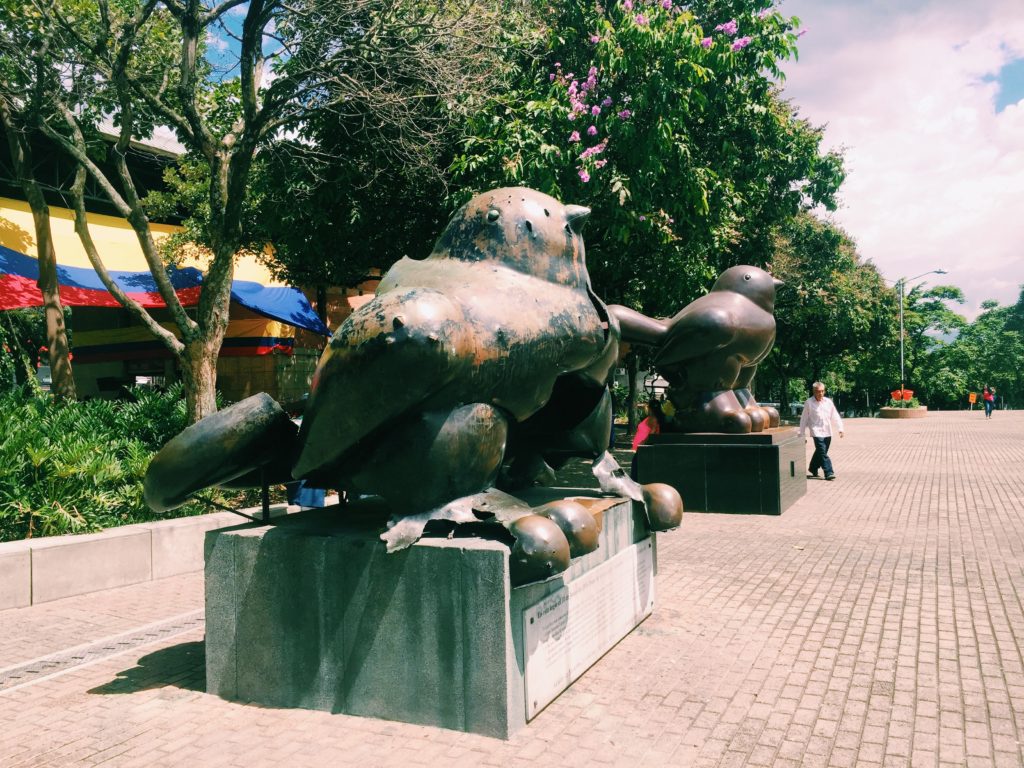 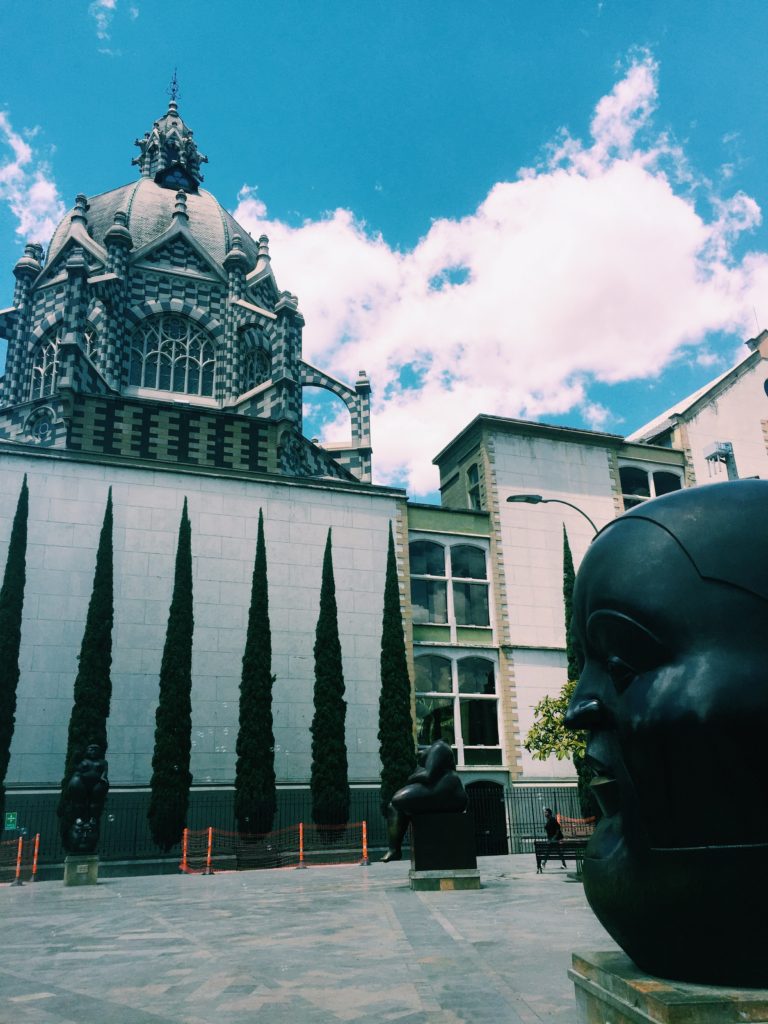 A few of many statues in Medellin by Colombian artist, Fernando Botero

Sadly, Medellin’s reputation among most of the world is one of drugs, crime and the country’s most infamous “celebrity”: Pablo Escobar. It’s true that Medellin isn’t especially safe, but it’s WAY beyond where it used to be. I never had any issues and neither did any of my friends while we were there, but it’s not exactly unheard of to be held up at knifepoint for your things. Which is why you leave them at the hostel. And despite the country’s reputation and history, it has to be said that Colombians are extremely proud of their country and very happy, friendly people. It’s been a rough go for them, but they brush off the setbacks and celebrate the victories (even if it’s only, say, a soccer match). They’re resilient and passionate. It’s what I loved most about the culture in Colombia.

While I really liked Medellin, after about two solid weeks of partying at night and lazing around during the day I was ready for some reflection time, nature and a bit of physical activity. Ok, if we’re being real I got a bad haircut from a flamboyant Venezuelan, which spurred a breakdown and some very emo posts (see: What I’m Listening To Vol. 11). Said breakdown was not actually about my hair – that was just the tipping point. I was feeling panicky. I could sense the end of my trip nearing (even though it was months away) and was desperately grasping to hold onto the feelings and experiences I’d come to crave throughout my travels. That coupled with the fact that my trip, while extremely fun and the still the best decision I’d ever made, had given me no clarity or direction as I had hoped it would. When unmet, my lofty expectations can send me into a downward spiral. I didn’t want to waste any more time in a club or bar. I wanted to feel alive. I wanted to do things that I knew I couldn’t at home. So I headed off to Salento, which ultimately influenced the remained of my trip much more than I could have ever imagined…

*Pro tip: when you arrive in a new city, try to do a walking tour straight away (unlike I did in Medellin) to get your bearings and get inside tips on what to do/where to go. Bonus – these tours are almost always free! 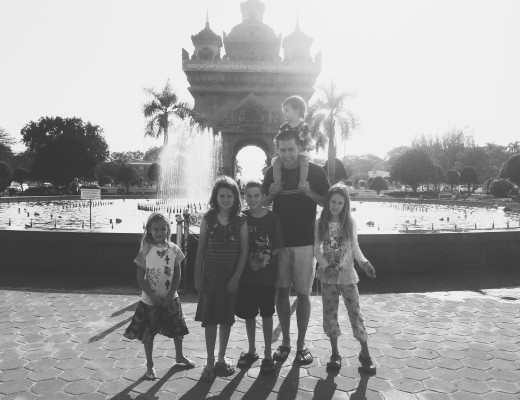 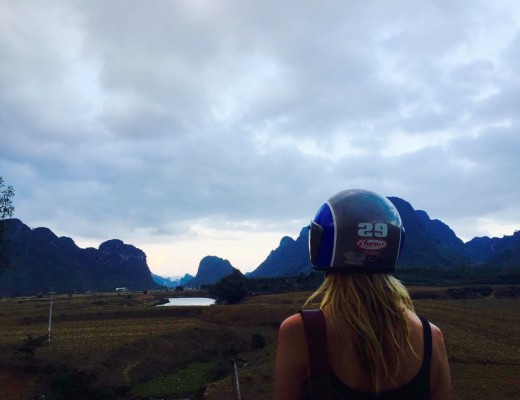 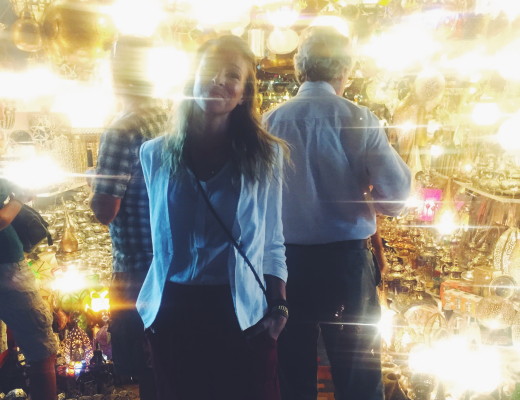