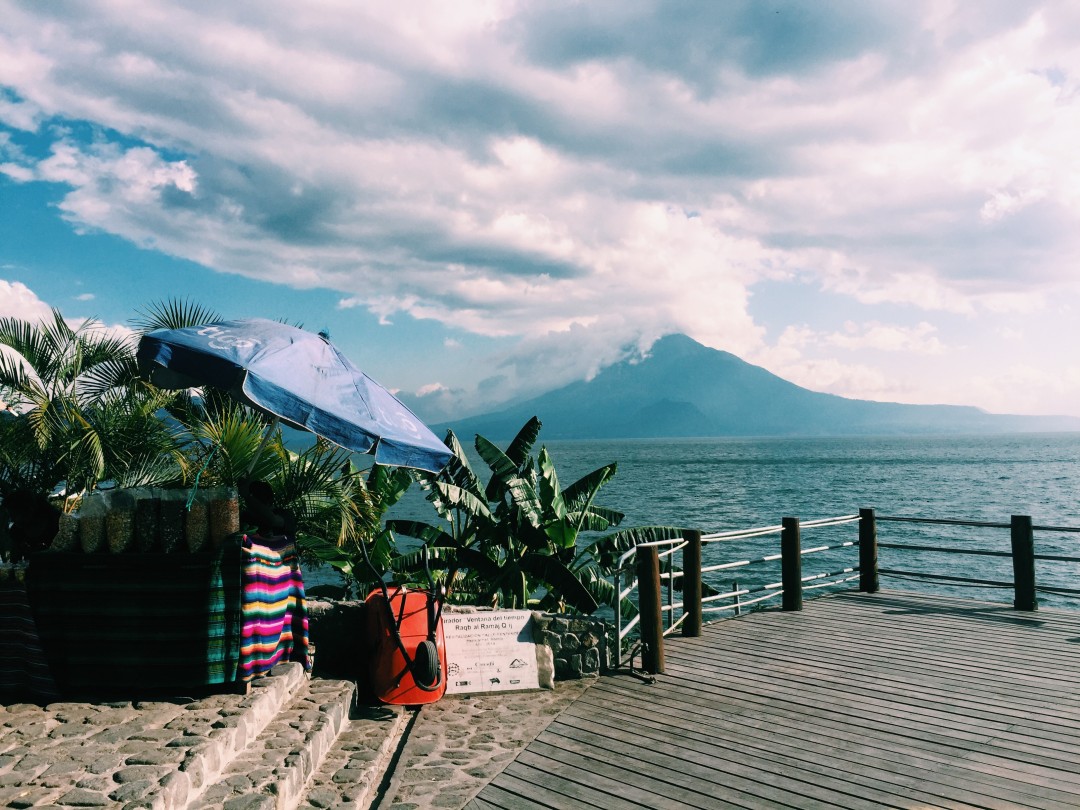 Lake Atitlan in Guatemala is beautiful. Really, you should go. But be forewarned that this post will not be a great representation of why you should. I wish I could say more exciting things about my time there, but I was in no shape for excitement or adventure of any kind. It was the first time I was really and truly sick on my adventures thus far, but I didn’t find that out until it was too late. For a short time, I was actually afraid it was Dengue Fever (it was not). I’m thankful that up until this point I’d been relatively healthy as I’ve had plenty of friends have to go to the clinic/hospital and, so far, none of that for me (knock on wood). But man was I miserable – missing my bed in Antigua and, more than that, missing my bed in Indianapolis. Here’s how it went down:

After holing up in Antigua studying and working out dutifully for weeks, I decided it was time to go on a little adventure. Thanks to a new friend at my school, Matt, I did just that one weekend. Matt was finishing up med school in Denver and had five weeks to travel/get credit for language school (is this real in med school? Apparently) before graduating and starting his residency. He’d been at Ixchel for a couple weeks but he took classes in the little garden downstairs and I had mine on the rooftop outside so, strangely, our paths never really crossed until the end of my third week. He was anxious to get out of town to dodge a hick/misogynist American guy who’d latched onto him and I wanted a buddy, so we paired up. One Friday, in about 30 minutes time, we bought our transfer tickets to Lake Atitlan, I booked the hostel and we threw some things in our packs for the weekend. We took the roughly six hour van transfer to Panajachel and from there a ferry to the pueblo where we were staying called San Pedro. 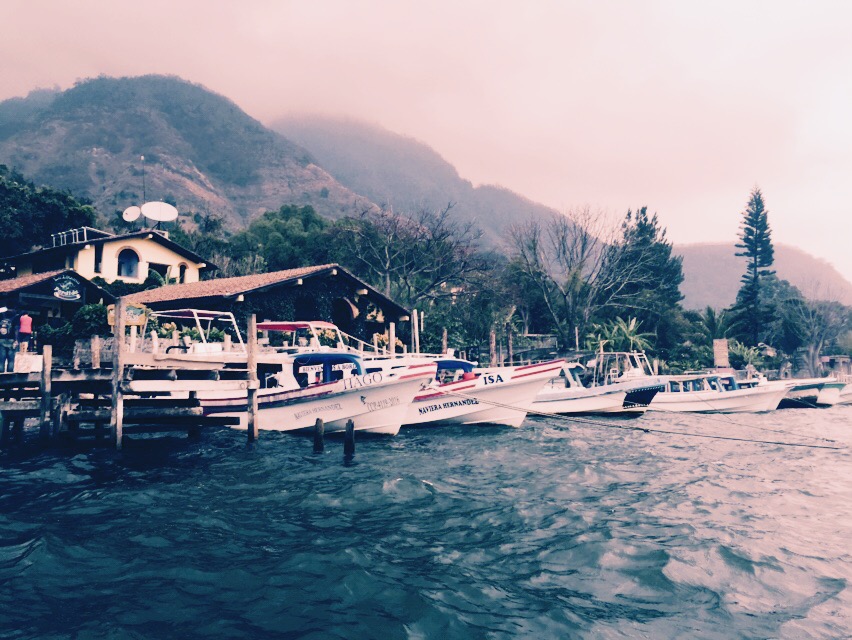 Boat ride views on the way to San Pedro 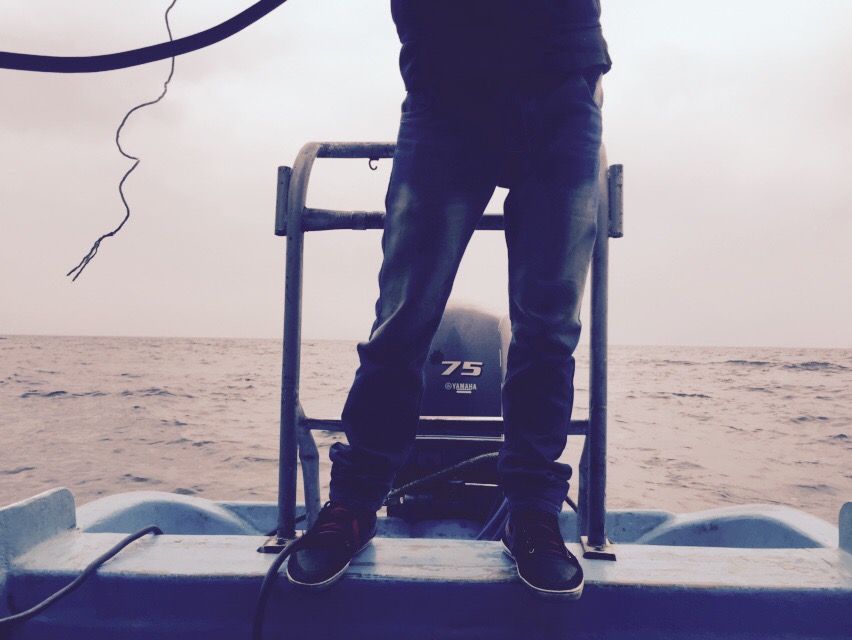 We’d both been studying hard, minding our Ps and Qs and agreed we were ready to have a little fun. Cut to us downing shot after shot of tequila at the trivia night hosted by our hostel, Hostel Fe. I mean they were on special at just 5 quetzals (which amounts to $.65). What were we supposed to do?!? Our hostel was a shit hole (there’s no nice way to say it), but it was right on the lake and had a great atmosphere for meeting other people. They also literally passed around a bottle of tequila for all 50-60 some people to drink from… probably didn’t help with my health status. You could form teams of five or less, which worked out perfectly as we buddied up with three English girls and absolutely SLAYED. After trivia the lot of us stumbled down the street to a bar for dancing and a surprising amount of Spanish practice. Turns out I’m near fluent when I’ve got some drinks in me… or at least I feel that way. 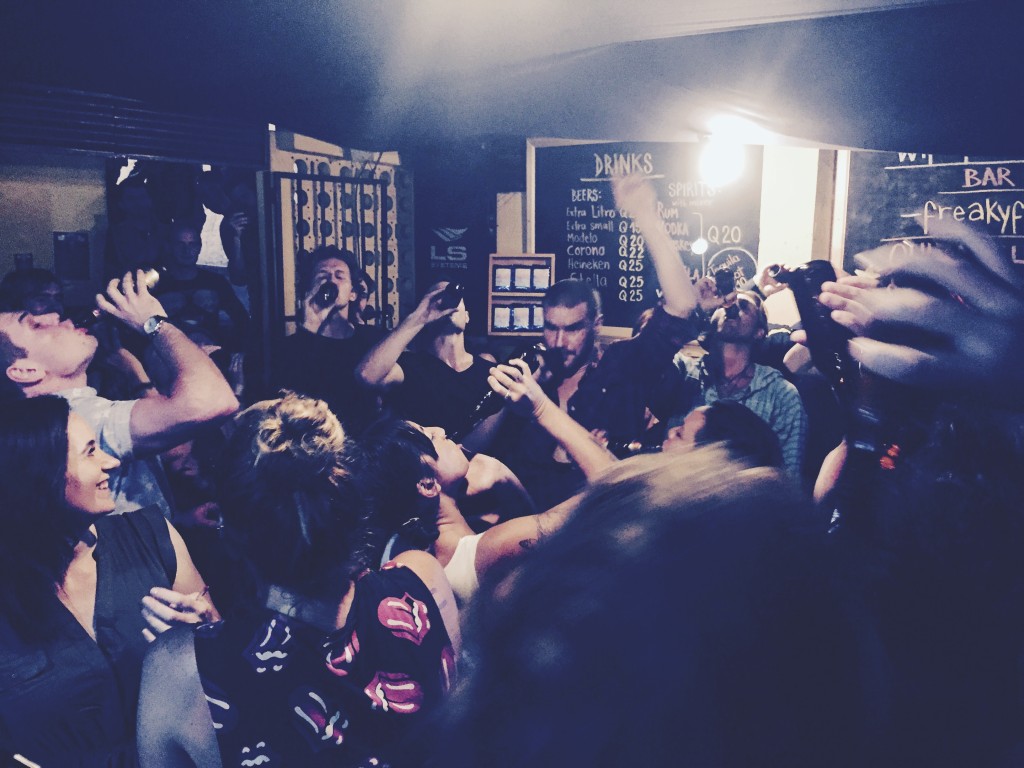 Trivia included other “challenges” as well 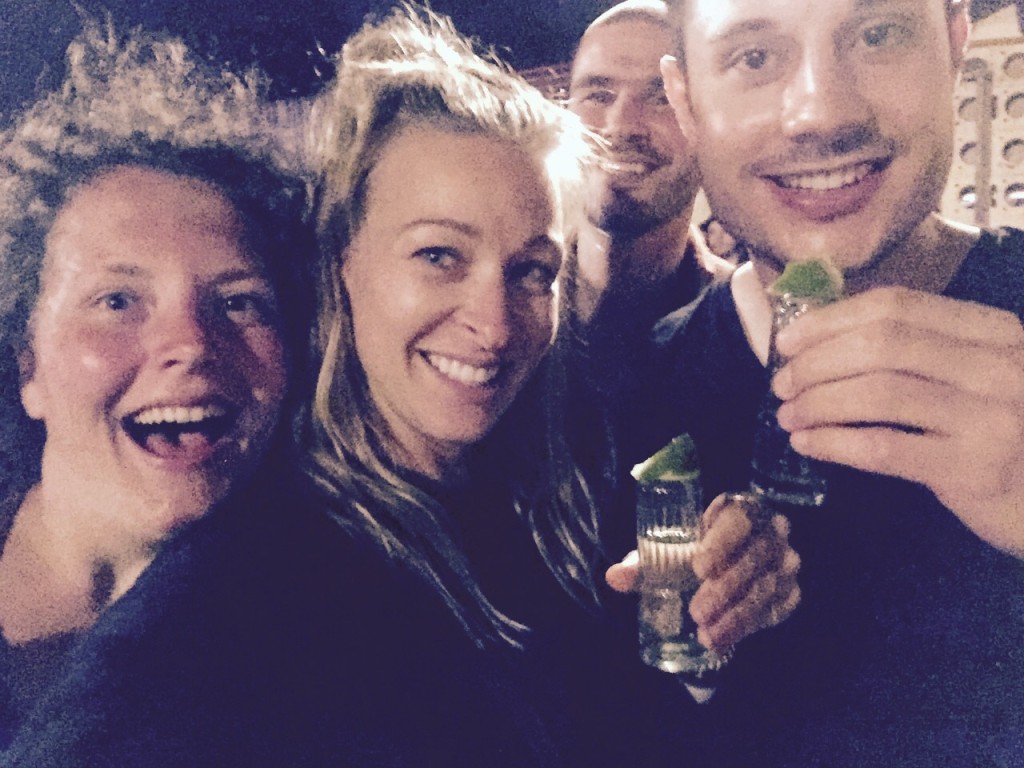 But the next day…. I thought perhaps it was just a hangover, fixable with food, coffee and a chilly dip in the lake. Not a chance. Body aches, chills, a temperature, headache… it all came crashing down on me far from the comforts of my cozy home stay room with my own private bathroom. In stark contrast our hostel room more closely resembled a dungeon (complete with bars on the window and cement floors) and the cold-water shower was rigged into an up-right-ish position with tape and shoelaces. I kid you not. It was hot, there was no airflow except when you opened the door to let in the mosquitos, and the mattresses appropriately engulfed you like the contents of a taco when you flopped down on them.

There I was, sharing a room with a near stranger, feeling sick as a dog and very much like dead weight. Luckily, Matt was (and is) a very, very sweet guy who attempted to sooth my concerns and quiet my constant apologies by saying he “didn’t feel all that well either.” Liar. He was trying to make me feel better by lying to me in a very kind, well-intentioned way, but I’d rather he just be honest and awful, which sheds a lot of light on my tendency to gravitate towards the worst kind of men. But I digress.

We did eventually clammer out of our room to take a dip in the lake, get a massage and explore San Marcos, one of the other little towns. But still feeling sick and weak, I was not at all in the mood for exploring. I laid in that room for what felt like hours… because it was. Saturday night we did nothing. I couldn’t even bring myself to have dinner. All we could do was put our heads together, prop up his phone and watch a movie. “Miserable” would be an understatement of gargantuan proportions. 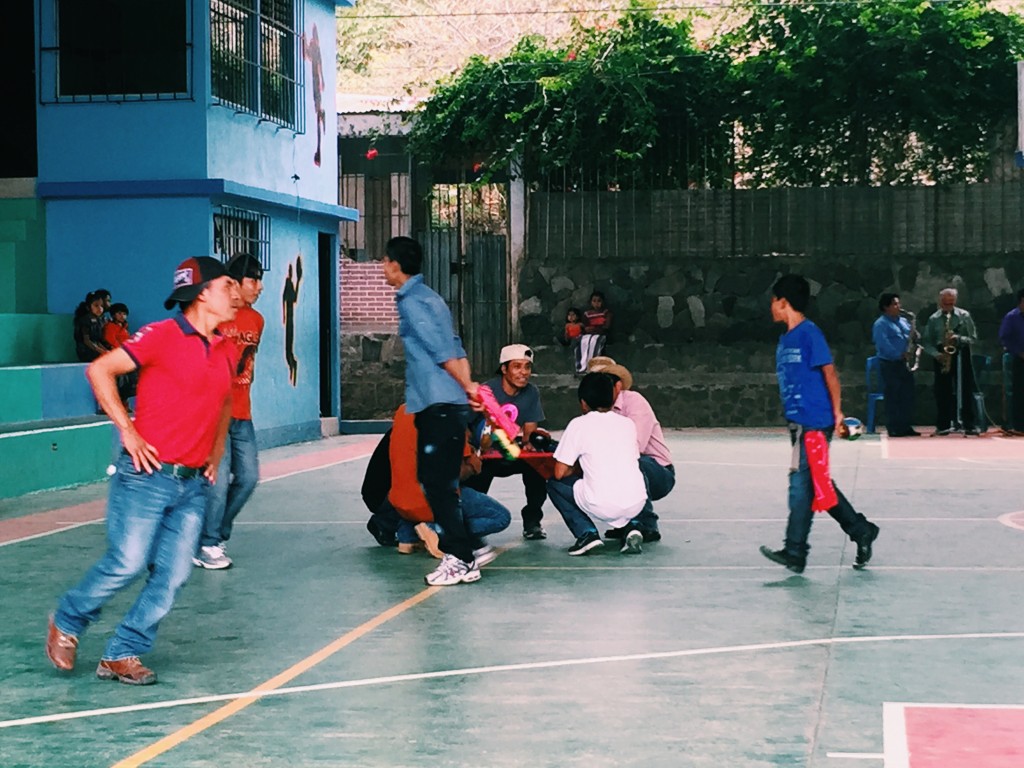 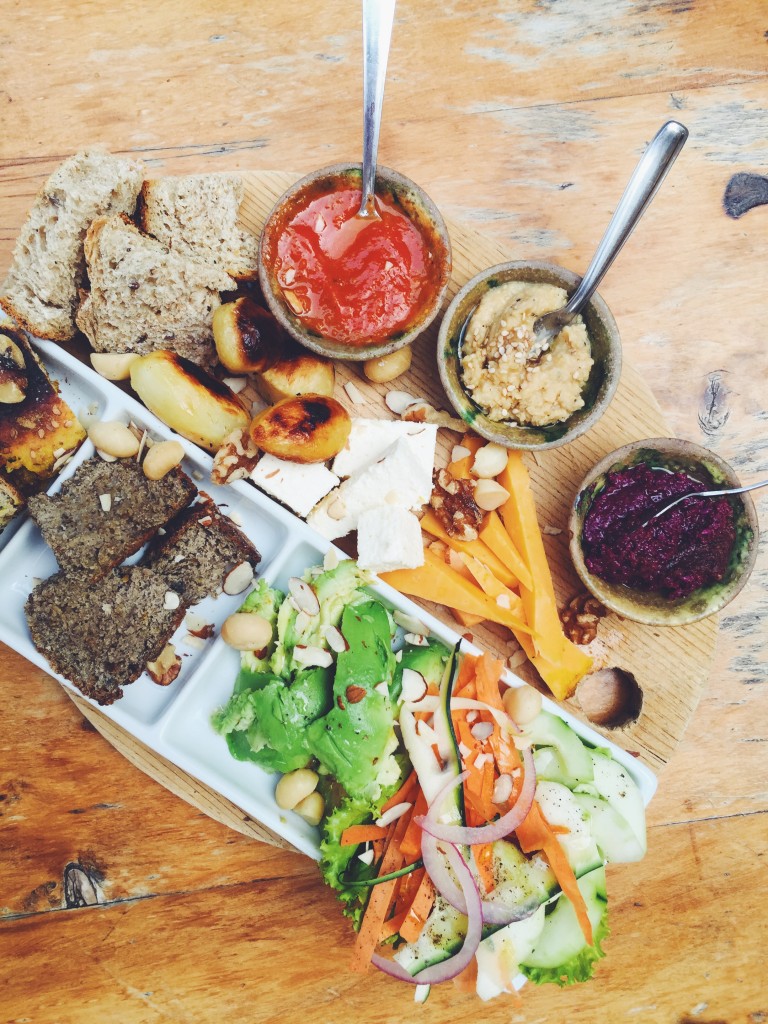 Lunch I picked at in San Marcos 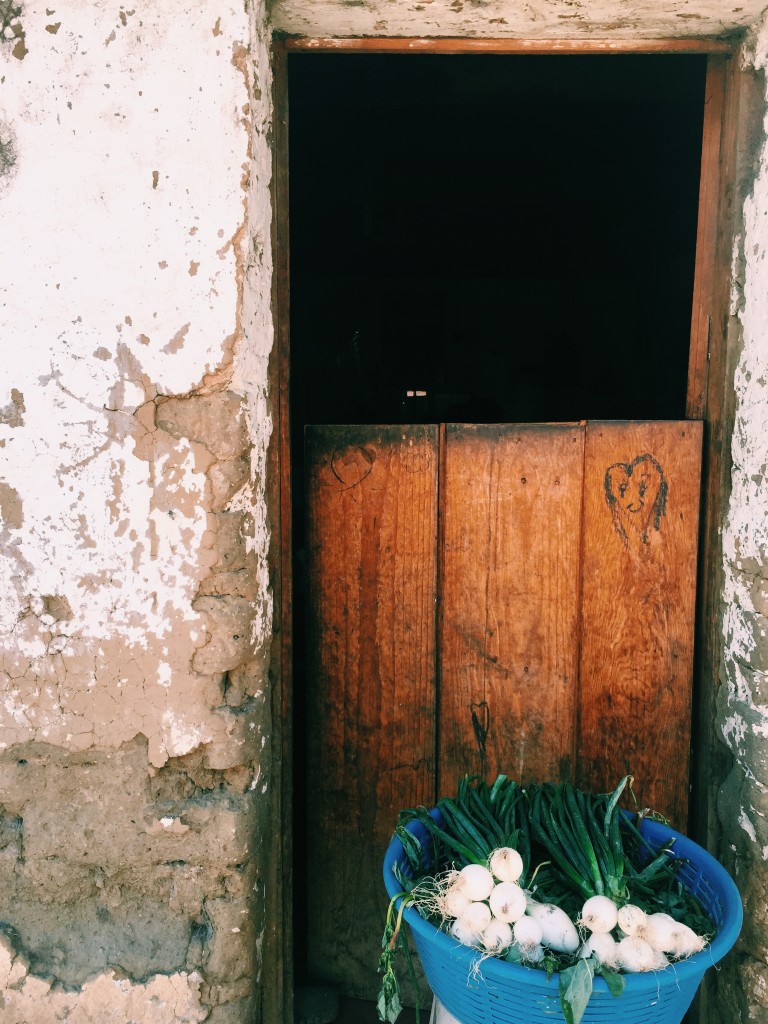 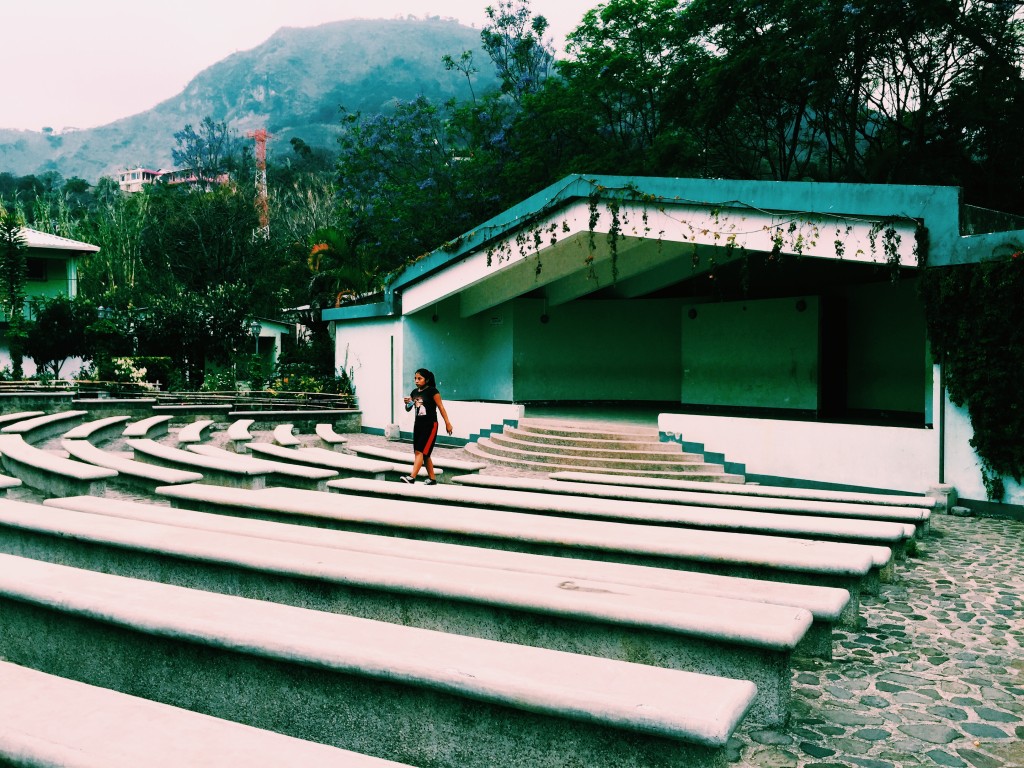 Symphony on the Prairie? 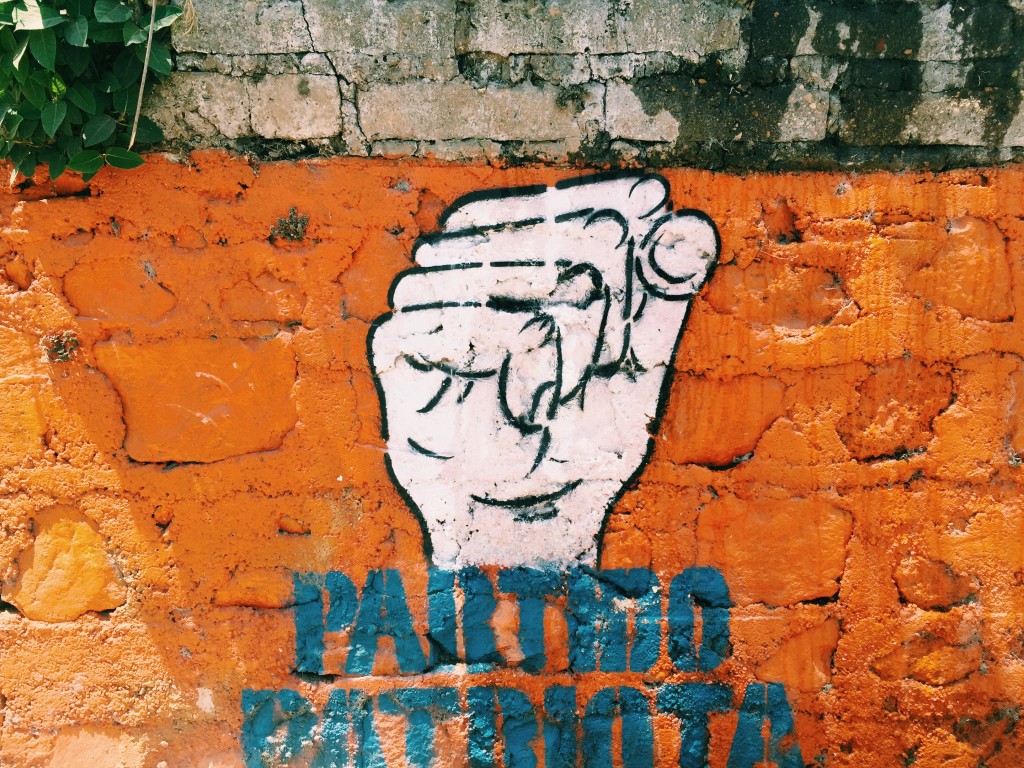 Feeling a bit better on Sunday we went over to San Juan to check things out and eventually back to Panajachel for the markets and lunch, but mostly we walked, talked and took in the sights. With a little time to kill in Pana, we were able to catch part of a local soccer match, which was an enlightening experience, but I have to say I was relived when it was time to catch our transfer back to Antigua. 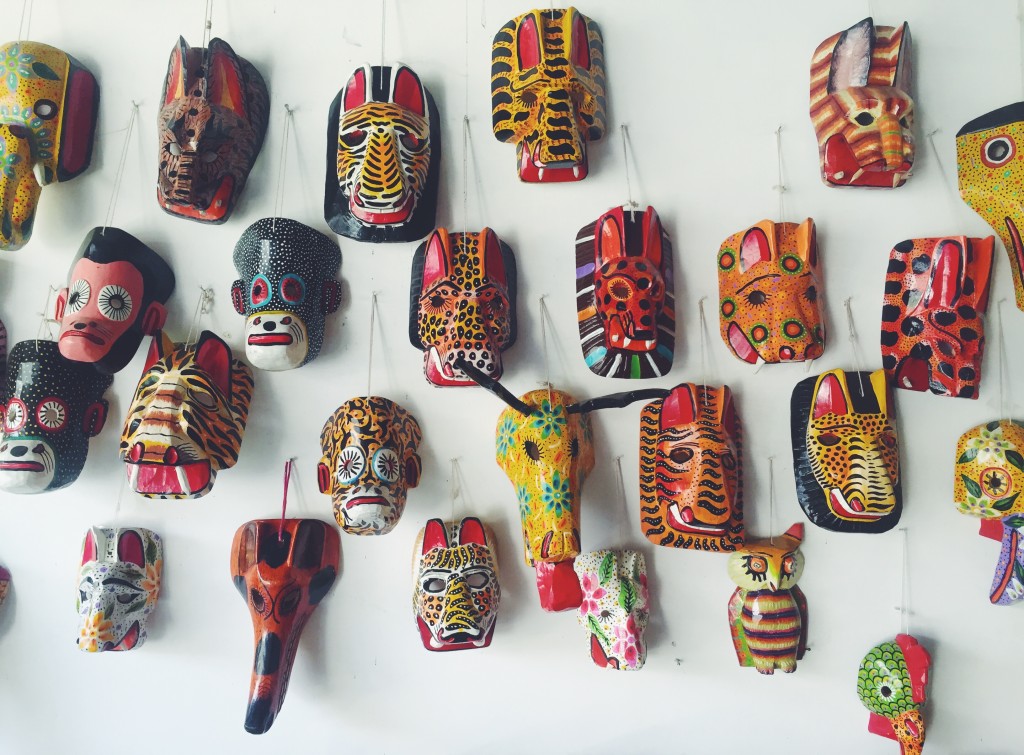 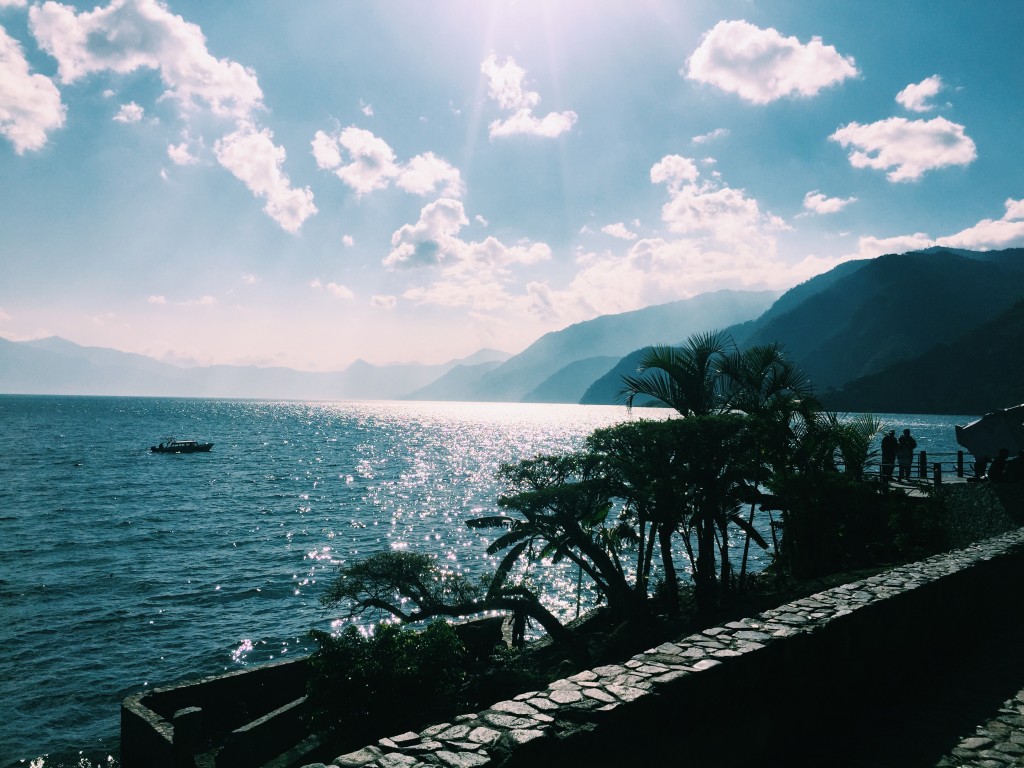 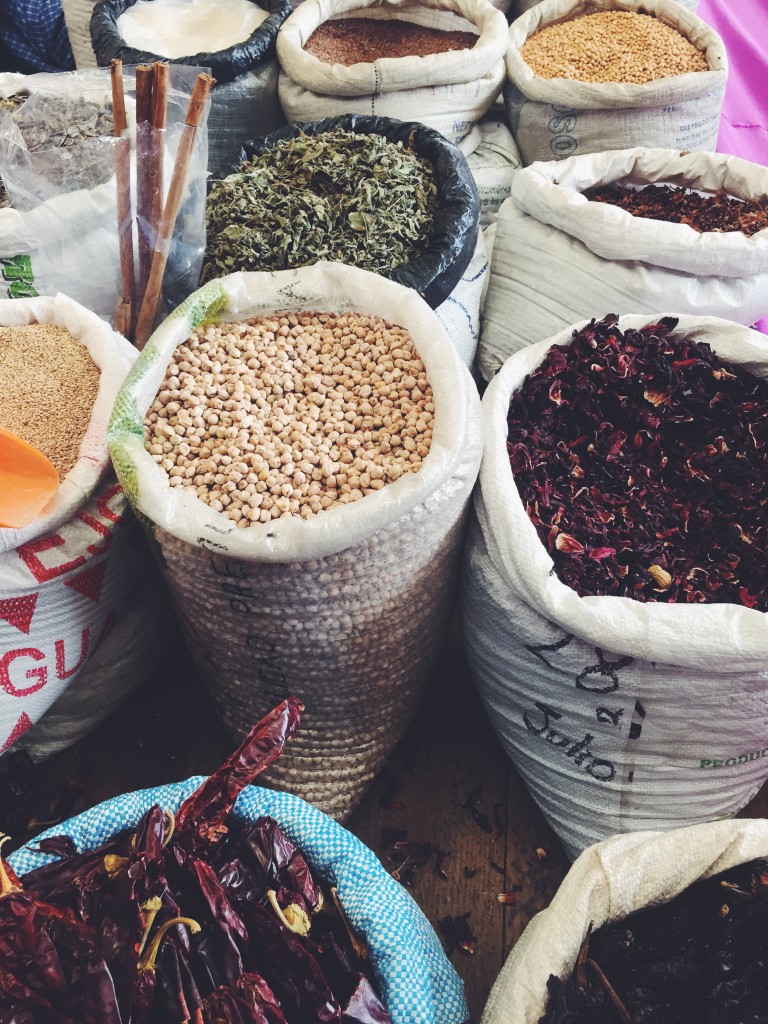 At the markets in Pana 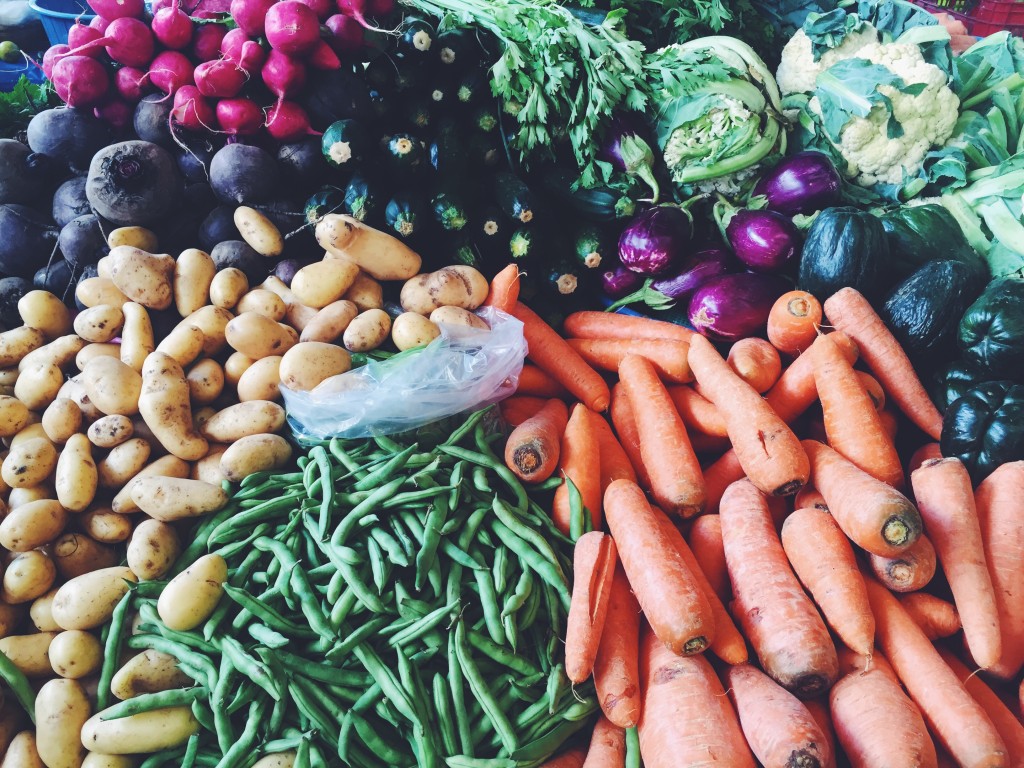 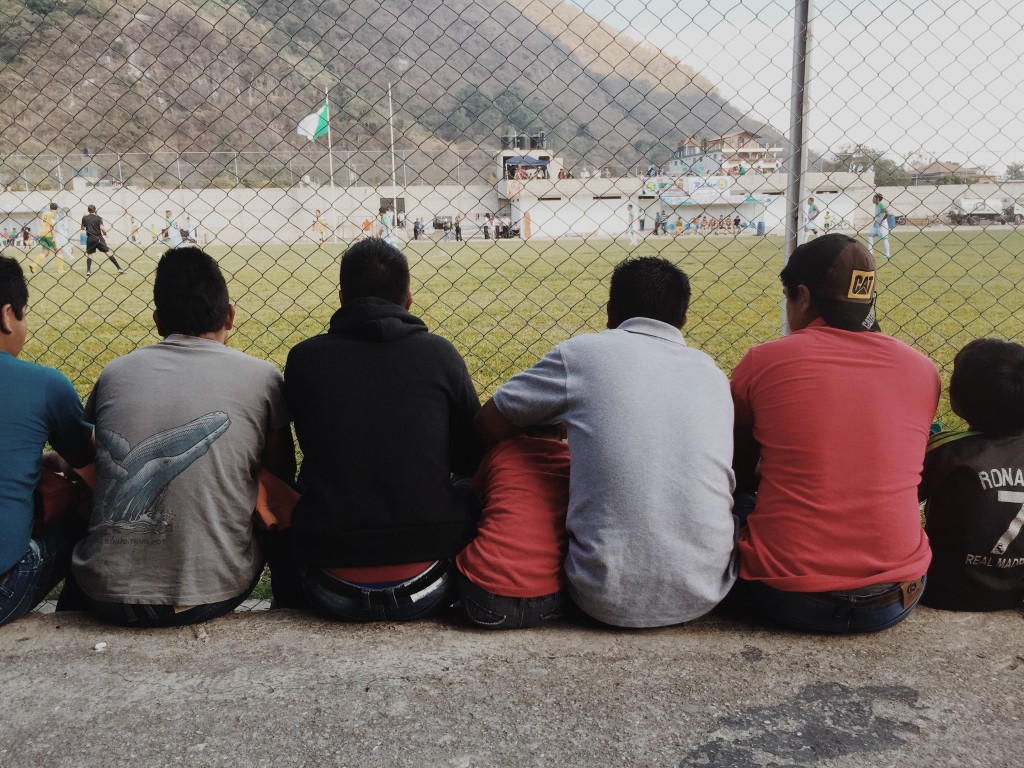 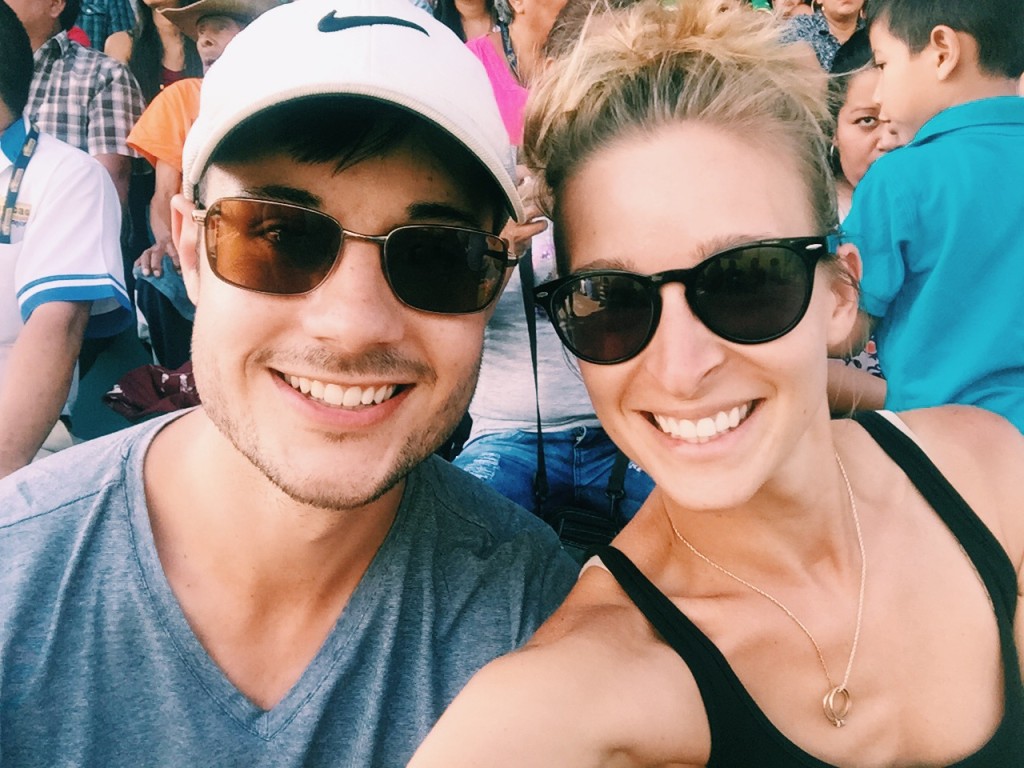 Matt and I at the soccer game

My pathetic experience aside, the lake is lovely and there’s plenty to do for a few days: trips around the lake to other towns, kayaking, swimming, trekking at surrounding mountains/volcanos, checking out the markets, etc. If I were to go back, I would actually stay on San Marcos (a sweet little town with a hippie vibe). And there were some serious ups: 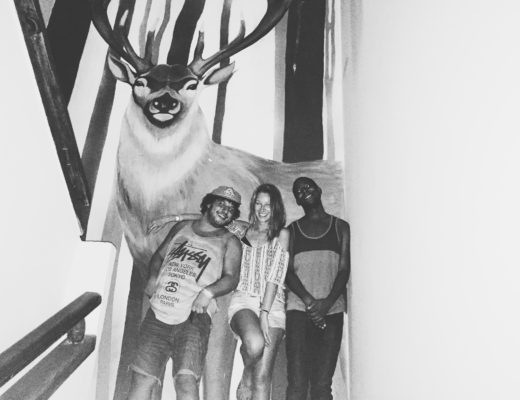 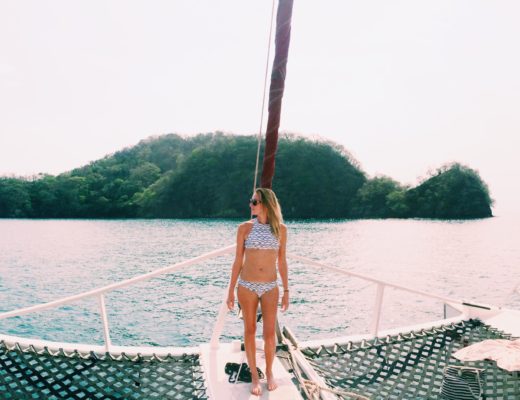 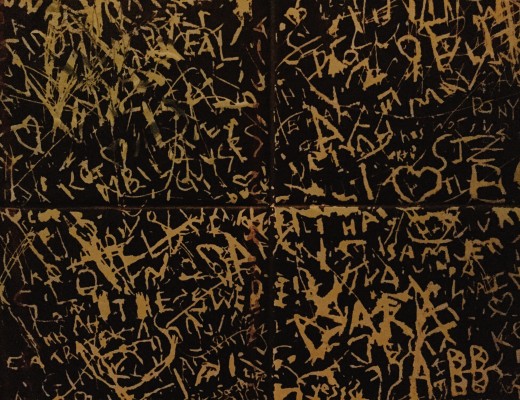